Emma Raducanu in stitches after unwittingly swearing in Italian during interview 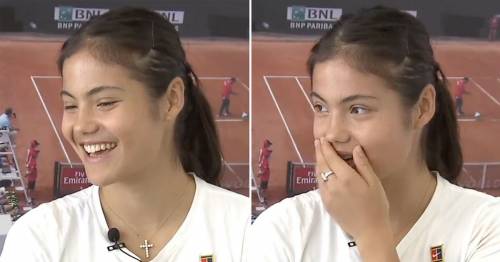 Emma Raducanu managed to see the funny side of things after she was left red-faced for accidentally swearing during an interview. The tennis star was speaking to a reporter ahead of her debut at the Italian Open when she made the hilarious blunder.

Raducanu was asked whether she had learnt any of the Italian language during her short stay in the country. She replied: "Err… I did… like, que cazzo?" an expression which roughly translates as 'What the f***" in English, and the Brit’s face dropped as the interviewer let out a gasp of surprise.

"Is that a bad word?" she asked, before putting her hand to her face in shock. "A little bit," replied the interviewer before laughing. After which Raducanu added: "My friend taught me that word. Cut that one. What does it mean?"

"I'll tell you later… at the end of the interview," came the reply, as a stunned Raducanu asked: "Really? Have I just sworn on camera??" before she began to chuckle in disbelief. She concluded: "Oh my god, erm… Bongiorno! I can't believe I just fully swore on camera!" before laughing again.

The teen will begin her quest for her first clay court title in the Italian capital against Canada’s Bianca Andreescu. The 2019 US Open champion has struggled with injury over the last two years and made her most recent comeback at the Stuttgart Open last month.

The 21-year-old said watching Raducanu during her remarkable success at Flushing Meadows last year left her desperate to play against the world number 12. "I watched her win the US Open, and I was really happy for her because I won it basically around her age," Andreescu said, as quoted by tennisworldusa .

"Obviously she was playing a Canadian (Leylah Fernandez), so that was really nice too. She's a really great player, so I'm expecting a really good match. I remember saying, 'I want to play her,' and it looks like I got my wish."

Raducanu couldn't believe her mistake during the interview
(

Raducanu revealed that she was also watching her next opponent closely in 2019. "Yeah, I watched that tournament," she said. "I thought Bianca was playing incredibly well. I think her physicality is one of her strengths, how good she is moving, how low she stays. I think that's really cool. And probably something I can learn from myself."

There is a slight worry for the youngster heading into the match as the Bromley local is still 'managing' a back injury suffered in her round of 16 defeat to Anhelina Kalinina in Madrid. However, the teen believes she is in suitable condition ahead of the match in the Italian capital.

She said: "I think it's just coming from a lot of intensity and overload. My back, I'm managing it. Like it's fine. But it's just trying to adapt again to the long matches, to the intensity. I think that all of the small sorts of niggles I'm getting, they're all related and connected to each other when something is overcompensating, perhaps. Yeah, we'll see."

Previous : Denis Shapovalov screams at Italian Open crowd to ‘shut the f*** up’ in extraordinary rant
Next : Woman in her 20s found stabbed to death with man arrested on suspicion of murder