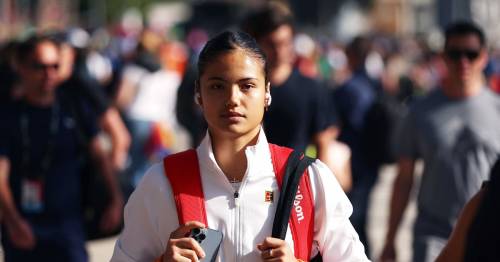 British tennis star Emma Raducanu is flying back to London to assess the recent back injury she sustained whilst competing at the Italian Open. Raducanu was forced to retire from her match against Bianca Andreescu midway through the second set due to the injury.

The teenager found herself 6-2, 2-1 down in the first round clash against her Canadian opponent, before deciding she was unable to continue due to the discomfort in her back. In the opening set Raducanu called for a medical time out due to the injury.

However, following her pause courtside the discomfort did not go away, and she informed the physio that she ‘couldn’t move’ after taking the decision to call it quits in set two.

A report from the Telegraph has now suggested that Raducanu will now head back to London to assess the true extent of the injury. Her stoppage in Italy is not the first issue the 19-year-old has had with her back in recent months.

As a result the injury also flamed up at both the Miami Open and last week’s Madrid Open, and has seemingly got worse whilst out in the Italy capital. Her decision to withdraw and head home for treatment is no doubt a big one, with the upcoming Grand Slam outing at the French Open less than two weeks away.

Do you think Emma Raducanu will compete at the French Open? Let us know in the comments section below.

Emma Raducanu is struggling with a back problem.
(

This is not the first injury setback Raducanu has faced over the past few months, having also endured a hip problem whilst out competing in Mexico at the end of February. Following her retirement in Italy, the teenage star admitted she may need to take more caution when assessing her fitness.

She said: “I think the last few weeks have been really positive. I’ve learned a lot about myself and my game has definitely improved on this surface. But for sure I need to make sure my back is fully right, however long that takes. I need to just keep on it.

“I don’t want to play my next match with a feeling of limitation because I think that I learned my lesson from this week, when to push, and when not to push. Probably today wasn’t right.”