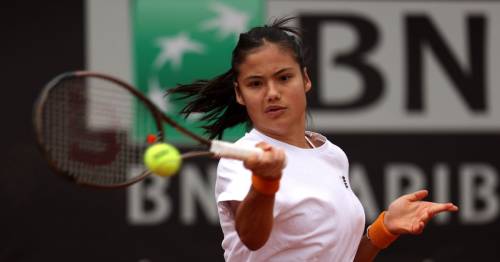 Emma Raducanu has branded herself a "loner" who is happy to self coach and be an independent learner. In April, the British tennis star split with Torben Beltz after just five months and has spent time with multiple trainers since her US Open victory last September.

She has been unable to find a long-term coach thus far, but the British number one has admitted she enjoys studying the game by herself and explained how she currently feels on tour. "I'd describe myself as a loner," Raducanu told reporters as she prepares for her Italian Open campaign.

"For the past year… I've had a lot of people around me a lot and very often. To be on my own is interesting because I'm kind of finding out a lot about myself, understanding what I need and what I don't need."

After reaching the round of 16 in Madrid, presenter Barbara Schett said the Bromley local may not need to hire a full-time coach. "It was a bit of a shock to hear that she split with Torben Beltz," the Austrian said on Eurosport last week.

"But you never know. You have to work with somebody together for a few months to actually see if you're fitting or not. But I think even though Emma has had a few coaches along the way, in the last year or two, she's been really inhaling some sort of information from each of them, which actually makes her a bit of a better tennis player, and I think it shows in her form now.

"Maybe she is a player who doesn't need a full-time coach. Maybe she needs a hitting partner who travels with her who she can hit with all the time. She is still figuring all of that out, but at the moment, it looks like she's really on the right track. She's happy to learn. I mean, she's like a sponge. She [takes on] every [bit of] information, all the information in."

This is the world number 12’s debut clay-court season and she has shown some promise thus far. The US Open champion hopes to build on her performances in the Spanish capital with a strong showing in Rome.

"Clay is very new to me," she added. "I definitely feel like I have been progressing with each week, improving, getting a better understanding of how to play points, when to stay in the point or when to stay aggressive.

"I don't think I'm like the finished product at all. But, yeah, I'm heading in a good direction." Tomorrow Raducanu will begin her Italian Open campaign against Canada’s Bianca Andreescu, who continues her comeback from injury.