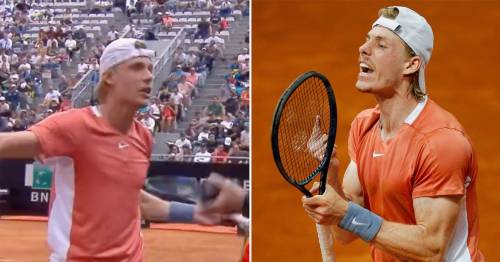 Tennis star Denis Shapovalov aimed a foul-mouthed rant at spectators during his ill-tempered first-round match at the Italian Open.

Shapovalov, 23, took on Lorenzo Sonego in Rome, and ultimately prevailed in three sets. After taking the Canadian player took the first 7-6, the home favourite hit back to win the second 6-3.

However, the world No 14 got the decisive break in the decider to take that one 6-3, setting up a second round tie with Nikoloz Basilashvili. However, the post-match talk had little to do with the quality of the play on show following the Canadian's earlier outburst.

At 4-3 up early on, Shapovalov was given a point penalty after he climbed over the net to point out to the chair umpire the mark on his rival's side of the court. Such actions are prohibited by ATP rules.

The left-hander then went court-side to complain about the sanction, and was roundly booed as he did so. Feeling he was being targeted by one fan in particular, he turned and screamed "shut the f*** up" in extraordinary scenes.

In his post-match press conference, the rising star did his best to justify his loss of temper: "He was just telling me to get off the court, get out of there, waving me off the court. Trying to obviously get under my skin or whatnot," he said, as quoted by the Daily Mail.

Shapovalov screamed "shut the f*** up" at one spectator
(

"I think the umpire just needs to keep an eye on it if a player mentions something. The reason why [the heckler] didn't get kicked out was because [the umpire] told me he didn't see what happened. That's very understandable. I feel like he kept an eye on him after that. It didn't bother me after that."

And he wasn't done there, arguing that tennis authorities needed to be stricter when it came to dealing with disruptive fan behaviour. He cited basketball in America as a model he thinks the ATP could follow.

"In the NBA there's a lot of hecklers and stuff like that," he continued. "They're pretty strict, the security and everything, that [fans] don't cross the line. If they do, they're kicked out right away."

However, this isn't the first time that Shapovalov has been involved in a tempestuous spat in 2022. At the Australian Open, he raged at eventual winner Rafael Nadal, while branding the umpire involved 'corrupt'.

And he admitted he now needed to watch on keeping his emotions in check: "It's a heat-of-the-moment kind of thing. I just need to improve with handling myself about that," he added.

"But in terms of going forward, I've played in Rome a lot of times. The fans love me here and I love the fans – even after the match, there were a lot of people standing, waiting for pictures, stuff like that. I do really appreciate the sport and the love I get here."

Previous : Thoughtful burglar breaks into family home, grabs lawnmower and cuts all their grass
Next : Emma Raducanu in stitches after unwittingly swearing in Italian during interview