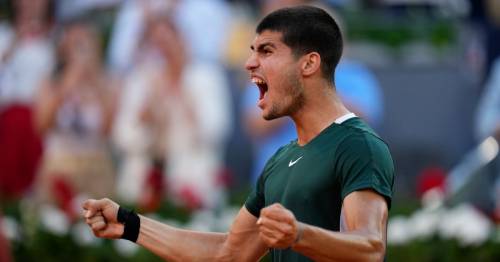 Carlos Alcaraz admitted he has taken a lot of confidence after he became the only player to defeat Novak Djokovic and Rafael Nadal back-to-back on clay.

The Spanish teenager triumphed over the world No.1 6-7(5), 7-5, 7-6(5) at the Madrid Open to book his place in the tournament final tomorrow. In doing so he superbly backed up his Friday quarter-final victory over Nadal as the 19-year-old lit up the Manolo Santana Stadium.

Alcaraz recovered from a set down against the Serb to take a sensational victory and, in doing so, gained plaudits from across the game. After the match the four-time title winner reacted to his victory and understandably said he had taken a lot of confidence from his triumphs over two of tennis’ greats.

"Well this makes me a lot of confidence right now to play the final tomorrow," he said. "I mean I know that I'm playing a really good game.

"For the rest of the season, I think that I am able to play against the best players in the world, beat them as well. So it makes me a lot of confidence."

The tournament’s seventh seed was also asked whether he thought there were any limits to what he could achieve following his brilliant performances. He replied: “I don’t think so.”

He added: "I mean, I just try to make results, to put a good game in every tournament, to still be there with the best in the world. I mean tomorrow I will go for it for the final as I did in Miami. And yeah, really really happy to be able to play a second Masters 1000 final."

This string of results has only added to the excitement surrounding the teenage sensation with so many in tennis excited by his potential. Building up to today’s semi-final Martina Navratilova told Amazon Prime Video Sport: “For me he’s a better version of Djokovic.

“He moves like Novak but hits a better ball out wide. More powerful than I’ve ever seen. He’s defying the laws of gravity out there.” Alcaraz will now face fourth seed Stefanos Tsitsipas or defending champion Alexander Zverev in Sunday’s final.