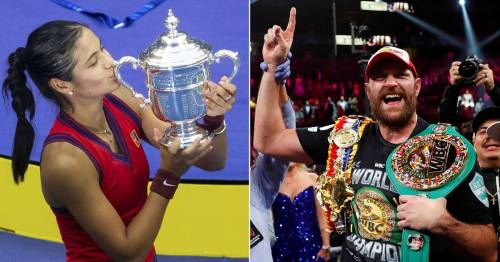 Emma Raducanu and Tyson Fury could both be absent from this year’s BBC Sports Personality of the Year Awards.

The US Open champion and undefeated WBC Heavyweight champion are among the favourites to win the prestigious gong, but they may not be in the building to pick up their trophy.

Last year Fury demanded the BBC remove his name from the shortlist, stating he doesn’t “need for verification or awards," meaning it's unlikely he will be in attendance at this year's event.

Raducanu is slated to compete at the Mubadala World Tennis Championship in Abu Dhabi between December 16-18, and the awards ceremony will take place a day after the tournament ends.

Emma Raducanu may be unable to attend the BBC SPOTY Awards
(

The teen will take on Olympic champion Belinda Bencic from Switzerland at the exhibition event in a rematch of the US Open quarter-finals.

There is a possibility the British Number one would be able to fly to Manchester in time for the ceremony, but she may also opt to stay in the Middle East to train before heading to Australia for the first grand slam of the year in January.

The tournament organisers are set to confirm travel plans for players competing at the Australian Open.

The expectation is stars may have to travel to Melbourne on charter flights before or after Christmas to enter the tournament quarantine bubble.

The 68th edition of the BBC Sports Personality of the Year Awards will be held at Salford's MediaCity on Sunday December 19.

The likes of Laura and Jason Kenny will be in the running after their heroics at the 2020 Olympics, and Lewis Hamilton, who clinched 100 F1 race wins and is aiming for a record eighth Formula 1 world title.