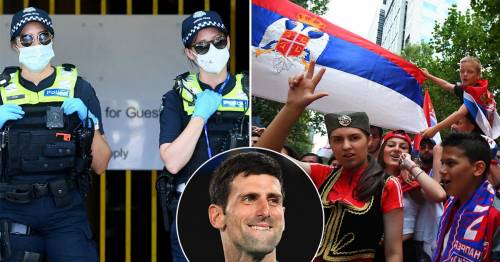 A surge in security is expected when the 2022 Australian Open gets underway on Monday, though it still remains uncertain as to whether Novak Djokovic will be present for his title defence.

Tensions in Melbourne have escalated since the world No. 1 was denied entry to Australia, having been stopped by the border force after travelling with what he allegedly believed was a medical exemption.

Judge Anthony Kelly overturned the decision to cancel Djokovic's visa on Monday, but uncertainty remains as Australian authorities investigate whether he may have lied on his entry application.

Djokovic supporters and ant- vaccine activists have clashed with police in Melbourne as a result of the ongoing debacle, with his Open participation having been transformed into a political event.

The Daily Mail reported recent scenes have encouraged Tennis Australia to increase security at the event, with many followers riled up as a result of the unvaccinated star being scrutinised in his return to Melbourne.

A spokesperson for Australian Immigration Minister, Alex Hawke, confirmed on Monday that the federal government is still considering the possibility of deporting Djokovic prior to the tournament.

“Following today’s Federal Circuit and Family Court determination on a procedural ground, it remains within Immigration Minister Hawke’s discretion to consider cancelling Mr Djokovic’s visa under his personal power of cancellation within section 133C(3) of the Migration Act,” read a statement.

“The Minister is currently considering the matter and the process remains ongoing.”

Who do you think will win the men's Australian Open if Novak Djokovic doesn't play? Let us know in the comments section.

Novak Djokovic won his legal battle on Monday, but his visa woes might not be over just yet

'Nole' has won the Australian Open nine times—three more than his nearest rivals, Roger Federer and Roy Emerson—and a 21st Grand Slam in Melbourne would make him the most prolific major-winner of all time.

That legacy has helped the Serb cultivate one of the most loyal fanbases in tennis, while his anti-vaccine stance has also made him popular in conspiracy circles.

Court documents detailing Djokovic's exchange with border officials confirmed for the first time that Djokovic has not received the Covid-19 vaccine, a question he had yet to definitively answer.

Tennis Australia will send more security to Melbourne Park in an effort to avoid a repeat of the 2007 brawls that broke out between fans from Balkan rivals Serbia and Croatia.

Djokovic was still emerging as a pro and had yet to win his maiden major at that time, when Serb fans were in attendance to watch Jelena Jankovic while their Croat counterparts cheered on Mario Ancic and Ivan Ljubicic.

Although it's still hazy as to whether the nine-time Melbourne champion will be allowed to defend his title, Djokovic took to Twitter to celebrate in the wake of Judge Kelly's ruling on Monday.

"I'm pleased and grateful that the judge overturned my visa cancellation," he wrote. "Despite all that has happened, I want to stay and try to compete in the Australian Open. I flew here to play at one of the most important events we have in front of amazing fans."

Djokovic's family have been vocal in condemning Australian authorities for their handling of the situation.

Father Srdjan released a statement urging the British Royal Family to act: "I call on Queen Elizabeth, the leader of the Commonwealth, to intervene and protect the human rights of my son and to stop the political prosecution carried out against him since he came to Australia."

Fans backing Djokovic to win a record-breaking fourth consecutive Australian Open title may be all the more compelled to ensure he succeeds in that pursuit should he be cleared to play this month.

Security may even be a greater concern if Djokovic is denied the chance to defend his title, however, with many of his loyal supporters eager to see the Serb break the overall Grand Slam record.

Previous : Ex-immigration minister urges Alex Hawke to deport Novak Djokovic – ‘His attempt must fail’
Next : Australian deputy PM hints at Novak Djokovic reprieve as he admits: ‘I got it wrong’