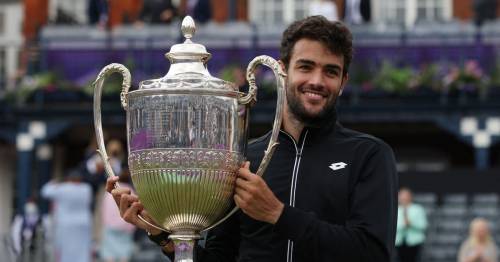 Tennis players may be forced to skip Queen’s if the ATP opts to reduce or remove ranking points from UK tournaments.

The board of the ATP convened on Wednesday to discuss the next steps in the wake of Russian and Belarusian players being banned from competing in the sport’s most prestigious tournament. That meeting came after the player council, which includes Rafael Nadal and Roger Federer, voted in favour of stripping Wimbledon of ranking points, which needs to be approved by a seven-man ATP Board.

The idea of halving the number of points on offer is also on the table, another reason which may deter some players from competing in the UK this summer, including the Cinch Championships at Queen's Club in West Kensington, the most famous pre-Wimbledon event. Nadal claimed it is “his job” to defend those who have been barred from the All England Club.

Italy's Matteo Berrettini is the reigning champion at Queen's
(

He was questioned about Wimbledon’s ban on Russian and Belarusian players ahead of the summer’s Championships. "I don't have a clear opinion on the matter and I don't want to declare anything,” the 21-time grand slam champion said.

Nadal refused to be drawn into a debate on the issue, saying: "When things like this happen, nothing will be perfect.”

Wimbledon took the decision to ban Russian and Belarusian players
(

When he was first questioned on the subject in Madrid, Nadal deemed the treatment of his Russian peers ‘unfair’. "I think it’s very unfair (on) my Russian tennis mates, my colleagues. It’s not their fault what’s happening in this moment with the war,” he said.

“The 2,000 points, whenever we go to the Grand Slams, they are really important and we have to go to those tournaments. So we will have to see the measures that we take. At the end of the day, what happens in our game, it doesn’t have any importance when we can see so many people dying and suffering and seeing the bad situation they are having in Ukraine.”

Previous : Family-of-six sleeping in one room in flat where children believe mice are family pets
Next : Rafael Nadal says it will be ‘amazing’ if Carlos Alcaraz wins 25 Grand Slams