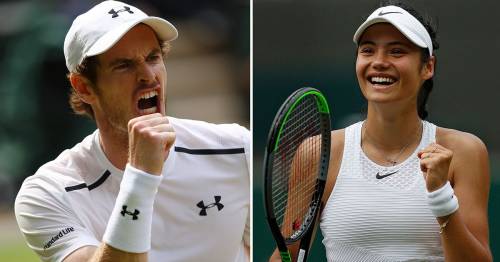 Andy Murray would be happy to form an all-star doubles team with Emma Raducanu at this year’s Wimbledon. The 35-year-old has previously formed an epic team at SW19, having partnered with Serena Williams back in 2019.

During an interview with Elle UK in May, the teen revealed one thing she would like to achieve in her career. “Just once in my life, I’d love to play doubles with Andy Murray at Wimbledon”, the US Open champion said.

When the two-time champion at the All-England Club provided a response, it was clear the feeling is mutual. “Yeah, I’d love to play with her. I love watching her play. I think she’s brilliant,” Murray told British GQ magazine.

“I think she’s going to be amazing for the sport. Not just in the UK, but especially in the UK. Actually, we had spoken last year about potentially playing mixed doubles at Wimbledon, and then both of us ended up doing well in the singles so we ended up not doing it. But yeah, I would love to play with her.”

Although both parties want to form a partnership it might not be possible this year. “I don’t know. I’ve not spoken to her about it, but would depend on the singles,” Murray said. “Obviously, we both will be prioritising that and hopefully having a good run there. And if that’s the case, then that will be our priority.

“But yeah, if we both didn’t do well, then maybe. At some stage in the future I would certainly love to. I think it’d be great fun.” Murray would love nothing more than to win a third Wimbledon title this year, and though it will be a tall task, tennis icon John McEnroe remains optimistic about his chances.

“If he was physically fit, you can't count him out against anyone,“ said the American legend. “I actually believe he'd be one of a handful of guys that could win it.

“Obviously if he's looking at Rafa and Novak, he's got to be thinking, he's going to have one last hurrah, I believe. I think that's entirely conceivable. What I don't know is how you know how close to 100% he is. Honestly, if he's at 90% of the level of what he was, I think he'd beat all but like four to six people, if he was 90%.

“If he's 100%, which is hard to believe that he is, but let's just say he's close to that, he could do anything. It's sort of exciting because it puts him back in the mix, which I think he deserves.”