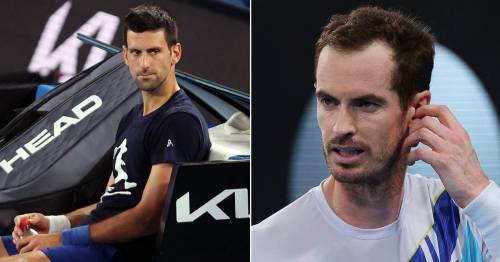 Novak Djokovic 's seemingly futile attempts to enter Melbourne and defend his Australian Open crown may be a welcome sight for some of the Serb's tennis rivals—but Andy Murray isn't one of them.

The incumbent world No. 1 appears likely to be deported after having his visa revoked for a second time in little more than a week, though the slightest glimmer of hope remains through a potential appeal.

And while many may feel justice is close to being served, Murray has shown sympathy for his former nemesis, who has encountered criticism for refusing to get the Covid-19 vaccine.

Rather than jump on the bandwagon, however, Murray—who has said he has a "good relationship" with the Serb, a long-time opponent dating back to their youth days—offered Djokovic a more compassionate response.

"It's not a good situation," the Scot told reporters. "I'm not going to sit here and start kicking Novak whilst he's down.

Andy Murray has suffered seven Grand Slam final defeats to Novak Djokovic, four of which were at the Australian Open
(

"I mean, I said it the other day, it's not a good situation for anyone.

"It's unfortunate that it's ended up in this sort of situation, and who knows? I don't know what the process is from now.

"I don't know what route he goes down, if he can appeal that and how long that takes, and can he still be out practising whilst that process is going on or still competing in the tournament?"

Murray, 34, is set to compete at the Australian Open for the first time since 2019 and has been drawn to face Nikoloz Basilashvili in the first round on Tuesday.

Who do you think will win the 2022 Australian Open men's title? Let us know in the comments section.

Novak Djokovic looks set to be deported from Australia
(

The two-time Wimbledon champion booked his place in an ATP Tour-level final for the first time since October that year, having defeated Reilly Opelka 6-7, 6-4, 6-4 on Friday to reach the Sydney Tennis Classic decider.

Nine-time Australian Open-winner Djokovic travelled to Melbourne allegedly under the belief a positive Covid test in December would clear him as medically exempt.

It now looks as though he'll be prevented from challenging for a record-breaking 21st Grand Slam title this month, however, and could even face jail time for lying on his visa application.

"I just want it obviously to get resolved," Murray continued. "I think it could be good for everyone if that was the case.

"Obviously a lot of people have criticised the government here, as well. It's not been good."

Fellow stars past and present have been less forgiving in their assessments as 18-time major champion Martina Navratilova said it would be "the right thing to do" for Djokovic to just "go home."

Greek star Stefanos Tsitsipas was even more damning in his criticism and said the Serb had travelled to Melbourne with plans of "playing by his own rules."

Djokovic is set to remain in Melbourne as his lawyers continue to fight his court case, which is expected to reach its conclusion on Sunday, one day before the Australian Open gets underway.

Previous : Prince Andrew’s fateful 30-minute talk with Queen as he lost all royal titles
Next : What has Novak Djokovic said about vaccines? Beliefs about Covid and mind powers unmasked