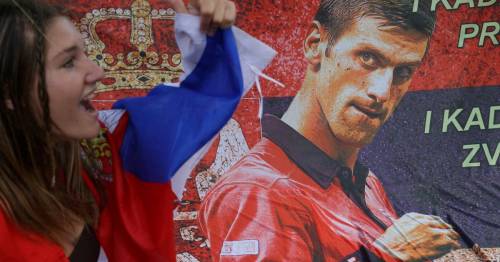 Novak Djokovic has lived through many a dramatic day on a tennis court, but even for a man with 31 Grand Slam finals behind him, nothing would have matched the theatre of what he went though off-court on Monday.

The will he or won't he saga that has plagued his proposed entry into this month's Australian Open has dragged on for months, somewhat monotonously, before exploding into a hybrid of frenzy and controversy this past week.

The chaos kicked off last Tuesday when the Serbian ended speculation over his vaccination status by announcing he had been given a medical exemption to compete in Melbourne, seemingly on the basis he has tested positive for Covid-19 in the past six months.

However, on Wednesday, that same exemption was dismissed by border force officials at Melbourne Airport, who revoked his visa and ordered that the 34-year-old be deported back to Europe.

That process was duly delayed when the lawyers of the world no 1 appealed the decision, with the hearing scheduled for Monday morning. In the meantime, Djokovic stayed in a government detention hotel in Carlton, Victoria, an ordeal seemingly ended when a judge ruled emphatically in his favour.

The saga however, isn't over yet. Here's what transpired on a day which will notoriously go down in history – and why many questions, and accusations, still hang over the head of the world no 1.

The previous day, UK sports fans had woken to the news that Jimmy Anderson had survived six agonising balls to secure England a whitewash-avoiding Ashes draw in Sydney.

Some 24 hours later, and the breakfast bulletins reporting from down under were no less intriguing, even if the result lacked the same clarity.

At 6.16am GMT, Judge Anthony Kelly announced he had quashed the visa cancellation, and ordered the Australian Government to pay legal costs and release Djokovic from detention within half an hour.

A transcript of his conversation with border force officials, where the Serbian admitted to not being vaccinated, revealed he had contracted Covid-19 twice – and as recently as December 16.

Fans of the star, who had long gathered outside the court house, then mobbed an exiting car which they believed was carrying Djokovic and for the all-time tennis great, all was sorted.

As police were turning to pepper-spray in a bid to deter those swarming the vehicle, rumours spread far and wide that Djokovic himself had been arrested.

These proved unfounded, although his brother, Djordje, told Serbian outlet Sportklub: "What we can do is to let this be known all over social media – they want to capture and lock up Novak again."

What emerged as more accurate information, is that Australia's minister for immigration, Alex Hawke, had a four-hour window after Djokovic was released from detention to order a second visa cancellation.

That time duly elapsed, but once again, things were not as clear-cut as they seemed.

A perk of Hawke's position is he still has the power to revoke the visa at a later date, and has tentatively promised to make a final call on Tuesday. Whatever final means now.

The notion of Djokovic testing positive for Covid on December 16 is perfectly plausible. After all, he's unvaccinated and had attended a Euroleague basketball match between Red Star and Barcelona days previously, an event which sparked an outbreak.

What's slightly trickier to fathom, i s on the same day as said test he attended an event commemorating his own personal stamp, and 24 hours later attended the Tennis Association of Belgrade for an award ceremony. At both gatherings, he was unmasked and willingly shaking his hands with attendees.

He was also pictured on the streets of his capital city on December 25, despite Serbia’s rules requiring 14 days of self-isolation.

During his son's impromptu stay in Carlton, Srdan Djokovic likened him to Spartacus and encouraged an uprising of the people. So when he, wife Dijana, Djordje, and Novak's Uncle Goran called a press conference in Belgrade, it was never going to be a mundane few minutes.

The family were in celebratory mood, with the honours of the most groundbreaking statement going to Mrs Djokovic, who said Djokovic had been subjected to 'torture and harassment', and promising more about what he went through would come to light.

The family of Novak Djokovic at their earlier press conference
(

She also described her son as "The boy who learnt not to put up with lies and cheating, and always fought for justice."

Ironically, given the magnitude of that statement, the family abruptly ended the conference when they were quizzed as to why Djokovic had seemingly flaunted the rules around isolation.

I dare say, we'll be hearing more from them.

His freedom may yet be short lived, but Djokovic wasn't going to waste the opportunity to head to the Rod Laver Arena and pose on the practice court – sending out the message that it's business as usual from now on in.

Pictured with his coaching staff, he said "I want to stay and try to compete in the Australian Open, I remain focused on that. I flew here to play at one of the most important events we have in front of the amazing fans."

Novak Djokovic won his legal battle, but his visa woes might not be over yet

He also thanked fans for helping him to "stay strong," and in-keeping with what has been a divisive story, replies to the post were very much mixed.

Should he be deported by Hawke tomorrow, it's not just this Australian Open it scuppers – as a three-year ban from the country will be tagged to his ticket back home.

On the contrary, this could yet be the Grand Slam that marks him making history by winning an unprecedented 21st major title, taking him clear of Roger Federer and Rafael Nadal.

Regardless of what news greets our coffee tomorrow though, there is at least one notion in this escalating drama that can't be contended.

There has never been an Australian Open build-up as absurdly shambolic as this one.

Previous : Man who binge ate over fears of coming out as gay says telling family saw him lose 11st
Next : Visa saga ‘damaging to Novak Djokovic’s well-being’ as ATP speak out for first time