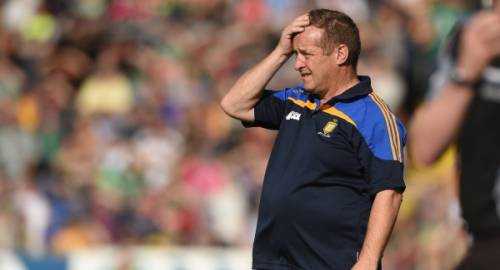 Clare football coach Colm Collins: “I’m disappointed about the pitches being closed. I think it would be very easy to enforce social distancing and allow lads to kick and puck as much as they wanted to.”

A straight knock-out Championship is on the cards should the inter-county season recommence in October.

That is what has been indicated to certain stakeholders as the GAA yesterday confirmed the cessation in Gaelic games activity will continue until July 20 and the inter-county season will not resume until October at the earliest.

Going against Taoiseach Leo Varadkar’s suggestion last Friday that the All-Ireland championships could return in August or September, the GAA do not intend resuming inter-county matches for another five months at least.

However, despite citing “a lack of appetite” for playing Championship games behind closed doors they have not ruled it out, something which Varadkar had mentioned in his appearance on The Late Late Show.

After teleconferences involving county chairmen and Coiste Bainisti (management committee), the decision to delay the Championship marks a crushing blow for those employed by the GAA whose earnings are dependent on inter-county action. Last week, it was revealed that there would be 30% to 40% wage cuts for workers contracted by Central Council beginning from next month and this was the level of reduction recommended for those employed at other levels of the organisation.

What’s more, the GAA have advised their units that they cannot open their grounds until July 20, the start of phase four of the roadmap to reopening Irish society and business. Some clubs had hoped their team members within a 5km radius of each other could return to training in pods of four from Monday week, the beginning of phase one, but this has been ruled out by Croke Park.

While jettisoning the qualifiers in the Sam Maguire Cup and the round-robin in the various hurling levels, it would be the hope of the GAA to retain the provincial format of their senior championships. Not since 1996 has there been a knock-out system in hurling and 2000 in football.

In such an event, no draw is likely to be required in Gaelic football but as the five-team Leinster and Munster senior hurling championships were organised on a roster basis a draw would have to take place to ascertain who receives a semi-final bye, one in each province.

However, due to time constraints the Central Competitions Control Committee may yet be forced to streamline the Championship and adopt an open knock-out draw, which could pit 16 teams against one another in the first round of the football championship.

Reaction among inter-county managers to the decision to postpone the Championship until October has been largely negative. A series of video conferences were last night taking place between management and players to discuss their next steps forward after the GAA advised counties “in the interest of players, to suspend inter-county training until further notice”.

“It was good to get a bit of clarity and it’s a long way away but it’s good to get that. I’m disappointed about the pitches being closed. I think it would be very easy to enforce social distancing and allow lads to kick and puck as much as they wanted to.

“It’s taking the easy way out just to say ‘we’re closed’. I would operate it on a one strike basis, that if you disregarded the social distancing you were gone.”

Collins added: “I wonder how good an idea is it to disband panels. We’re only chatting and laughing with each other and doing an odd quiz. I think it’s good for mental health.”

On RTÉ’s Six One News, Wexford senior hurling manager Davy Fitzgerald also questioned the call to push back any sort of collective training until the end of July. He saw no issue with pods of four players training together, while at all times maintaining social distancing.

“I suppose the most important thing I feel at the moment, I just want to see as many people healthy as possible and getting right. The next four to six weeks are very important and we have to stay to our measures as much as possible.

“Do I think training in fours and using social distancing is a problem? I don’t, I really don’t. And I think it was good after nearly two months of isolation to allow that. For the GAA to take it away again, not 100% sure.

“All I can tell you is I know if any of my Wexford lads ring up and they want a programme or they want to know what to do, I’ll be helping them anyway I can in that respect because, you know what, it is a tough time, players are used to doing stuff. If they want help with anything, I’ll certainly be there. It is not about games for me. It is just making sure they are okay and they keep that form of exercise; that is very important, as well.”

The GAA’s call – questions and answers

What’s the Government’s reaction to the GAA’s statement?

One of surprise, certainly the decision to postpone inter-county games until October. Taoiseach Leo Varadkar might have been spitballing when he suggested on Friday that the All-Ireland championships could return in August or September behind closed doors. However, members of the Cabinet had hoped the GAA would have been in a position to reschedule it for then as a means of raising the national mood. Some Government officials are adamant that the necessary safety protocols could be put in place for the games to take place and be televised.

Can club players return to training in pods of four from Monday week as the roadmap states?

Not on GAA soil, they can’t. The GAA have extended their cessation of activity until July 20 with games unlikely to take place until August. So the locks on the club grounds will remain bolted until then.

It’s mentioned elsewhere on this page that the Championship could be knockout. Will the same have to apply to club championships?

Got it in one. Counties have already been given a derogation of rule to change their championship structure at short notice. With time being of the essence, there is likely to be a streamlining of competitions at club level too and the 2020-21 provincial and All-Ireland club competitions under threat.

Why is the GAA calling for inter-county teams to stop training “until further notice” when they’re not doing it now, at least not collectively?

The player injury scheme is suspended therefore the footballers and hurlers are not insured so it’s a good question. All the same, anyone believing squads are not going to keep working together, albeit remotely, is in dreamland.

Could the GAA change their minds about these dates?

Yes. As the statement mentions, “We will continue to monitor the dates and timelines as revealed by the Government and our arrangements will remain under constant review.”

Previous : Experts worry push for 2020 mail voting could leave Native American voters behind
Next : What’s the Scór app getting ready for return to action