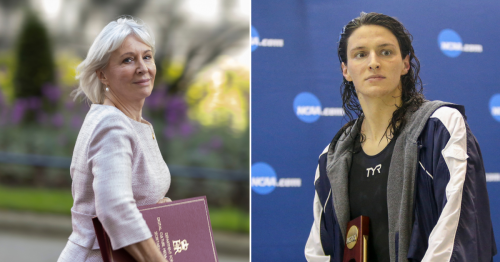 Culture Secretary Nadine Dorries has urged other sports to follow the example of swimming’s world governing body FINA and bar transgender athletes who have gone through puberty from competing in women’s events.

FINA announced the decision after an extraordinary congress in Budapest, adding that it will look to set up an open competition category in which athletes can compete irrespective of their sex or gender identity.

Dorries welcomed the move and indicated she is already in the process of bringing together leaders of other sports with a view to establishing similar parameters across the board.

She told LBC Radio that FINA had made “absolutely the right decision”, adding: “I have been of the opinion that FINA came to today for a long time and have discussed this with my own department and established a policy.

“We’re about to have a round table with all of the sports’ governing bodies. It is just unacceptable that trans women compete in women’s sport.”

The move means Lia Thomas, who in March became the first transgender swimmer to win a major US national college title, will be ineligible to compete in the women’s category with immediate effect.

FINA’s announcement comes two weeks after cycling’s governing body, the UCI, voted to double the period of time before a rider transitioning from male to female can compete.

FINA president Husain Al-Musallam said: “We have to protect the rights of our athletes to compete, but we also have to protect competitive fairness at our events, especially the women’s category at FINA competitions.”

FINA’s 34-page policy document clarifies that male-to-female transgender athletes are still eligible to compete in the women’s category “provided they have not experienced any part of male puberty beyond Tanner Stage 2 [which marks the start of physical development], or before age 12, whichever is later”.

Female-to-male transgender athletes will be eligible to compete in male categories, but in the sports of high diving and water polo they will be required to submit an ‘assumption of risk’ form, and are advised to seek advice on their physical capability.

Do you agree with the decision to change the policy by FINA? Let us know in the comments section.

She wrote on social media: “I can’t tell you how proud I am of my sport for doing the science, asking the athletes/coaches and standing up for fair sport for females.

“Swimming will always welcome everyone no matter how you identify but fairness is the cornerstone of sport.”