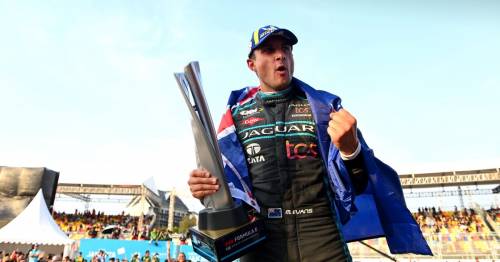 Mitch Evans concedes going through the data with a fine-tooth comb ensured his Jaguar was a "rocket ship" after their early season struggles.

The New Zealander became the first man to win a Formula E race in Jakarta as the grid visited the Indonesian capital for the first time. Evans was able to rise from third to take the chequered flag, narrowly beating championship rival Jean-Eric Vergne. It leaves Evans just 12 points off pace setter Stoffel Vandoorne.

Any ambitions Evans had of winning a first Formula E title seemed remote after the third round in Mexico. The Kiwi had picked up just one point with his Jaguar looking notably off the pace, but a two-month break allowed the English manufacturer to address a host of issues and put Evans right back in the title fight.

He said on their early season work: "There's a massive software development race going on to try and make the cars faster, more efficient, better braking, better acceleration. So obviously last year we got to the end of the season and were in a good place performance wise. But you don't want to stand still as you know everyone will make marginal gains.

The Jaguar driver claimed a third win of the season

"At the start of the season we went down a different route in a few areas to try and create performance. After Mexico it was a real struggle, so it was a shock and fortunately we had two months off to deeply analyse what was going on and we found quite a few things that were not operating the way we expected.

"On the simulator before Rome it started to feel back to where we wanted it and then we got to Rome and it was a rocket ship. At the moment we're not completely bulletproof – in Berlin we had a tough few days, but we think we know why. Not one thing, it's multiple things that add up."

Evans, who is the only man this season to pick up three wins, still has seven rounds to negotiate as he looks to take advantage of Jaguar's huge leaps forward. The grid head to the Moroccan city of Marrakesh next before double headers in New York, London and the season ending finale in Seoul.

Grandstand seat tickets for the 2022 London E-Prix on July 30 & 31 are available now starting at £49 from www.FIAFormulaE.com/London

Previous : William Klein’s Pictures Will Still Knock You Out
Next : Martin Lewis explains how much you’ll get from £15billion cost of living deal