The shell-shocked Premier League champions were 4-1 down at half-time at Villa Park on following an Ollie Watkins hat-trick and John McGinn effort. Ross Barkley and Jack Grealish, netting a brace, then added to the hosts’ tally after the break.

It was the first time Liverpool – whose goals came at 2-0 and 5-1 down via Mohamed Salah – had conceded seven in a match since 1963.

Robertson said on Liverpool’s official website: “At times we couldn’t believe it, to be honest.

“Every competition on the pitch they won and when that happens you’re never going to win a game of football. That result as a Liverpool player is embarrassing.”

Watkins netted the opener in the fourth minute as Villa punished an error by Reds goalkeeper Adrian, setting the tone, and Liverpool boss Jurgen Klopp said afterwards that “pretty much everybody made massive mistakes around the goals.” 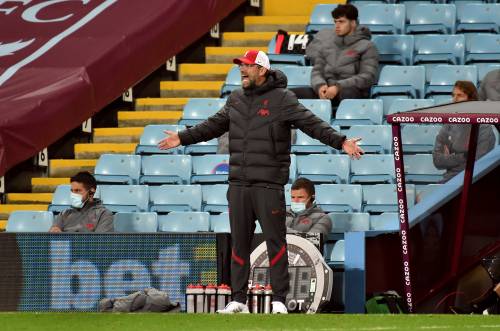 Jurgen Klopp lamented “massive mistakes” made by his Liverpool side (Peter Powell/PA).

Robertson said: “We made far too many mistakes that ended up in goals. We were well short, well below par.”

The Scotland left-back added: “We were 4-1 down in the first half and this Liverpool side believes that we could have come back – of course we did.

“But the fact we then go out and concede as many goals in the second half as well, that scoreline becomes embarrassing when you play for this club, it’s not acceptable and that’s something we all have to deal with.

“We need to go away for two weeks now (for the international break) and then we’ve got a Merseyside derby (at Everton on October 17).

“Look, the lads will be ready for that. It’s up to us to be as fit and fresh as possible with all the international games, but we’ll stick together and make sure this performance hopefully never happens again.”

Watkins’ goals, which took his record to five in six games in all competitions following his club-record switch to Villa from Brentford last month, were his first in the Premier League.

It was a ‘perfect’ hat-trick, as he scored the first with his left foot, the second with a fine right-footed strike and then wrapped it up with a header.

When asked if it was the best night of his career, the 24-year-old forward told VillaTV: “Yeah, definitely.

“I’ve scored hat-tricks before but it was against Newport away on a boggy pitch with about 2,000 people there.

“It’s a shame there’s no fans here but to score against a team like Liverpool is unbelievable.

While Liverpool’s winning start to the Premier League season crashed to a halt in their fourth fixture, Villa’s continues – it is the first time since 1962-63 that they have opened a league campaign with three victories, and they are up to second in the table.