The 27-year-old headed home Jack Harrison’s cross after 88 minutes for the only goal of the derby clash, finding the net for the third straight Premier League game since Leeds’ promotion back to the top flight.

There was little Blades goalkeeper Aaron Ramsdale could have done, having otherwise produced a fine individual display for the Blades.

At the other end, Illan Meslier also shone between the posts for the visitors in a match that looked destined to finish goalless until Bamford struck.

His goal sealed back-to-back Premier League wins for Marcelo Bielsa’s side while the Blades have lost all three of their Premier League fixtures this season and have yet to score a goal.

Leeds threatened early on when Mateusz Klich curled a perfectly-weighted pass in behind the home defence for Harrison to latch on to inside the penalty area but the winger, on loan from Manchester City again this season, tried to pick out a team-mate when a shot at goal might have been the better option.

Luke Ayling did not pass up the opportunity to shoot shortly afterwards and his effort from the edge of the area needed to be pushed aside by Ramsdale diving to his right.

Bamford’s first opportunity saw him ghost between Ethan Ampadu and Jack Robinson to head over the crossbar from Kalvin Phillips’ cross. 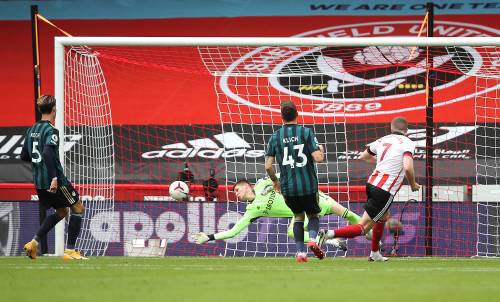 Leeds had enjoyed the better of the opening half an hour but they needed Meslier to prevent them from falling behind as the young Frenchman produced a superb save to brilliantly deflect John Lundstram’s shot from point-blank range wide of the post.

The game became end-to-end thereafter for the remainder of the first half. Bamford glanced another header inches wide before David McGoldrick poked the ball wide at the other end.

Ramsdale showed good agility to get fingertips to Stuart Dallas’ 20-yard effort after a neat one-two with Ayling. Meslier then got a strong hand to George Baldock’s rising shot after the wing-back threatened inside the penalty area.

The succession of fine saves continued at the start of the second half when Ramsdale repelled Helder Costa’s driven low shot, diving to his left.

Baldock worked Meslier again down by his near post just before the hour, but it was a relative routine stop by the 20-year-old this time. 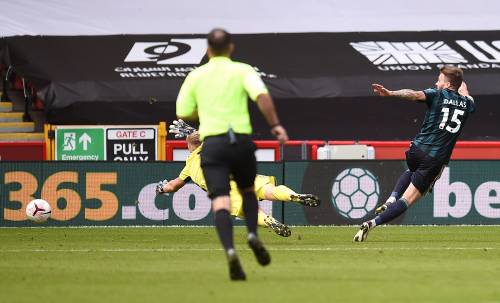 Stuart Dallas, right, shoots towards goal but sees his shot cleared off the line by Chris Basham, not pictured (Oli Scarff, PA)

When Ramsdale was beaten, rounded by Dallas after the Northern Ireland international simply raced on to a long ball forward, Chris Basham was on hand to clear away the ball just in front of the goal line after Dallas took aim at an empty net.

Neither manager was settling for a point as both brought on strikers midway through the second half. Blades boss Chris Wilder called on captain Billy Sharp and Oli McBurnie, while Bielsa introduced Leeds’ club-record signing Rodrigo and Ian Poveda.

Poveda and McBurnie quickly set about making an impact. Ramsdale made another good save to claw away a curling strike from Poveda while McBurnie glanced a header wide from a corner.

It looked like the game would finish without a goal but Bamford had other ideas, with his downward header from close range sealing victory for Leeds.