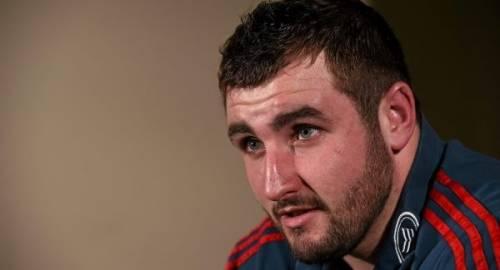 The judicial officer who heard James Cronin’s anti-doping violation case has defended his decision to hand the Munster player a one-month suspension.

Cronin tested positive for two banned substances, prednisolone and prednisone, following Munster’s Champions Cup pool clash at home to Racing 92 last November 23 and was not covered by a Therapeutic Use Exemption.

Competition organisers EPCR referred the matter to independent Judicial Officer Antony Davies who heard the case last week and ruled that the prop had committed an “unintentional anti-doping violation” as a result of having had the wrong antibiotics dispensed to him by a pharmacy.

The one-month ban handed down by Davies could be appealed by Sport Ireland and the World Anti-Doping Agency (WADA), both of which are considering whether the length of suspension is too lenient given that Cronin will be free to play again after May 16 without having missed any games due to the Covid-19 outbreak.

Davies told Off The Ball he was comfortable with his decision being reviewed but defended his determination that Cronin’s “level of culpability was low” and the suspension was adequate.

“We know that the prescription issued by the doctor to the pharmacy had amoxicillin only on it and we know that he was handed a packet with two tables in it, two different sorts.

Davies added: “Yes, potentially it could have been avoided but the big problem here is with the pharmacy, it’s a serious and unexpected mistake.

“He saw his own name on the medication and sometimes players trust absolutely the environment they’re in their clubs, with the team doctor, the nutritionists, people like that and they don’t question in my view as much as they ought to do, exactly what they are asked to take.

“And in this case James Cronin didn’t and it was a careless mistake but an understandable one in the circumstances. I felt that his level of culpability was low, set against similar cases towards the lower end of the zero to two years.

“Given that there is still the possibility of an appeal by WADA or Sport Ireland in the case, it may well be that they decide my decision is one that no reasonable legal representative could have come to, in which case they will come to a different decision themselves… It is all subject to further independent review.

“I am sure if it is felt that it is out with this sort of decision that could be reasonably expected in this case, then something else will be substituted for it at a later date.”

Previous : Tesla Tells Furloughed Employees in US to Prepare for Another Week of Unemployment
Next : IMF Approves $643 Million Disbursement to Ecuador to Fight COVID-19 Pandemic