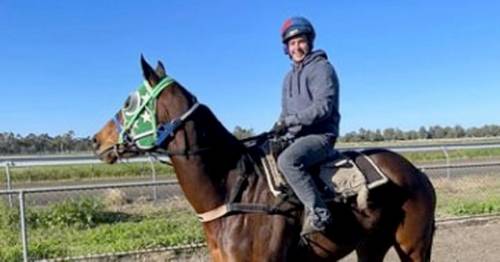 A transgender jockey has bravely spoken about his devastation at losing contact with his mum.

Tyler Leslight told how it took him a year to recover from what happened after he came out, but now insists he's "never been happier". The 22-year-old detailed his emotional journey after landing his biggest success in Australia earlier this week.

He celebrated the career milestone aboard Fire King at Mackay racecourse, in a sprint broadcast on national TV. Leslight, who has previously been in the winners' enclosure, became the first transgender jockey to take a top class event.

But in the aftermath the rider, who was born female and decided to medically transition to male at the age of 16, opened up on his heartache. He told Fox Sports: "There’s been loss, I lost my mother as she doesn’t speak to me anymore. At the time when I was 17, that broke me as a kid and I thought my world was over, it took me a good 12 months to get over that.

"I was 18 when I started my medical transition. But things happen for a reason, I can’t worry about that sort of stuff and I just have positive people in my life.

"I moved from Victoria as I couldn’t even get a job working as a trackwork rider down there, I started working trackwork in Queensland and I probably couldn’t even ride a donkey. There were also people who didn’t want to give me a go or didn’t want the world to know the truth about me.

"They were embarrassed about me."

Leslight appeared overwhelmed after taking the 1,200 metre contest on the three-year-old chestnut horse, trained by Olivia Cairns. The young sportsman previously detailed his challenge of transitioning.

Tyler Leslight was delighted with his first major race win
(

"I was lucky enough to figure out who I was as a person. Mentally for me it was a big deal and I was scared," he said.

"But at the end of the day I wasn't happy and I knew if I medically transitioned I would be happier. Even if you lose people if they don't want to support you, then they're not worth having in your life anyway. I've never been happier. I may have lost a couple people in my family because of their judgement, but just surround yourself with people who support you."

Leslight participated in 12 races before his triumph on Tuesday and came home in front in a contest at Gladstone a month earlier. He said his grandfather, who used to train horses, would be delighted that he has now added a major race to his record.

In the UK, Victoria Smith made history in 2018 as the first transgender jockey. Formerly known as Vince Smith, she transitioned after 17 years riding in races, with 250 winners on the CV. At the time, she said: "I'd love to be able to ride a winner, to be able to say I had ridden a winner both as a male and as a female jockey. And just to help as many people as I can."

Previous : Psychedelic neon home for sale at £355,000 baffles house hunters with what’s inside
Next : Desert Crown is the new Derby favourite after brushing aside trainer’s concerns in Dante