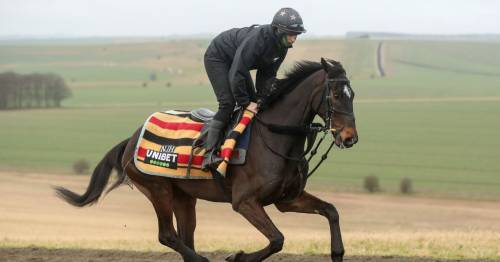 Ante-post favourite Shishkin has been ruled of the Betfair Tingle Creek by trainer Nicky Henderson.

The unbeaten chaser was odds on with the bookies for the Sandown Grade 1 on December 4.

He was due to take on Chacun Pour Soi and Nube Negra in the first big clash of the season at the minimum trip.

But Henderson feels his horse is not quite ready to meet his two talented opponents at this early stage.

Watching his piece of work in Lambourn led to the trainer's decision.

“I’ve just spoken to (owner) Joe Donnelly and we’ve sadly and reluctantly decided that Shishkin is not going to run in the Tingle Creek,” Henderson said earlier.

“There’s nothing wrong with him, but I just haven’t got there. He worked this morning and he just isn’t sparky at the moment. I think I just got behind the ball a little bit.

Shishkin on the gallops
(

“We did his wind in the autumn which wasn’t a problem, but it just put us behind the ball and Nico (de Boinville, jockey) and I both feel he’s not quite on his A game.

“It really is a thin line. We’ve scoped him and everything and there’s nothing wrong, but you can’t afford to go into this (at) anything bar 100 per cent.”

Henderson is now lining up the Desert Orchid Chase at Kempton over Christmas as an alternative assignment.

Chacun Pour Soi, trained by Willie Mullins in Ireland, is the new 11-8 favourite for Sandown on Saturday week with the sponsors.

Dan Skleton's Nube Negra is next best at 7-2 with the Paul Nicholls-trained Greaneteen priced at 5-1.

Betfair Spokesman, Barry Orr said: ‘’It’s disappointing for Racing fans that they won’t get to see Shishkin on Saturday week and that abdication leaves Chacun Pour Soi heading the market at 11-8."

The grey is 16-1 with the firm to better the record of any of the Ditcheat winners, including Kauto Star, with a big race hat-trick.