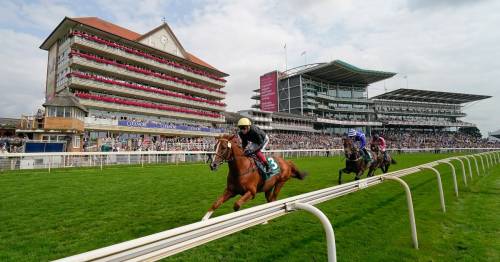 Frankie Dettori looks set for a historic moment aboard Stradivarius in the Ascot Gold Cup (4.20pm).

John Gosden's staying great chases a fourth win in the flagship race of the big meeting.

Fourth 12 months ago, the stamina test did not pan out how favourite backers expected, with Stradivarius held up in his run.

By contrast Subjectivist enjoyed a dream run and the veteran could only manage fourth.

But this is a new day and in an event which suits so well, Stradivarius can give his fans an afternoon to savour.

WALBANK took a hefty step forward from his first to second start and is fancied to give his going-places trainer and jockey their first Royal Ascot triumph.

The son of Kodiac – dam No Lippy was a three-time winner for Mark Johnston – impressed at the Tattersalls Craven Breeze-Up Sale in April before going under the hammer for 525,000 guineas.

Starting out for David Loughnane over today’s course and distance at the start of last month, Rossa Ryan’s mount compromised his chance with some unruly conduct in the preliminaries but still showed promise with a length-and-three-quarter second to Godolphin’s Noble Style.

That first experience was of an obvious benefit to my selection when he appeared at York 15 days later – Walbank justified odds of 2-7 in style from three opponents, moving with purpose before scooting clear to score by seven lengths.

That performance stamped Walbank as a smart recruit to two-year-old sprinting ranks, and another step forward will put him firmly in the mix.

The Antarctic is in there, too, after scoring at Tipperary and Naas, along with debut course-and-distance winner Bakeel and, at bigger odds, Crispy Cat.

ISRAR is fancied to produce another personal best now that he tackles a mile and a half for the first time.

His father Muhaarar was a champion at six furlongs, but the John and Thady Gosden trainee evidently takes after mother Taghrooda, herself the cream of the 2014 Classic generation with victories in the Oaks and King George VI And Queen Elizabeth Stakes.

After a win at Doncaster and a second under a penalty at Salisbury in two outings as a juvenile, Israr made his return to action with a handicap third at Newmarket’s Craven meeting in April.

My selection then took a step forward to lift Newbury’s London Gold Cup a month later, getting the better of Surrey Mist by half a length.

That race has a rich history as a springboard to greater heights and, with a 6lb rise in the weights to be expected, Jim Crowley’s mount can thrive for the additional yardage to go in again.

A full field of improving three-year-olds makes for a trappy contest, but Post Impressionist, Mandobi and, at bigger odds, Balhambar are all capable of playing a part.

Too green to do herself justice when a debut sixth at Kempton Park 10 days before Christmas, the William Haggas-trained daughter of Sea The Stars has shown her true colours this season.

My selection made her comeback in a maiden over Nottingham’s extended mile at the start of last month, and powered clear of Queen Of The Skies for a five-and-a-half-length supremacy.

A fortnight later, Sea Silk Road took in the Listed Height Of Fashion Stakes over 10 furlongs at Goodwood, for which she was sent off a well-supported 11-10 favourite.

Content to race in rear after a slow start, Tom Marquand ushered his mount forward in the straight and, having hit the front inside the final furlong, Sea Silk Road didn’t flinch in fending off Eternal Pearl by half a length.

Haggas wisely resisted the temptation to rush to Epsom for the Oaks a fortnight on and, with more to offer at a mile and a half, Sea Silk Road is expected to cope with the step up to Group 2 level.

Musidora Stakes runner-up Life Of Dreams is feared most, ahead of Mukaddamah.

STRADIVARIUS is the selection to match Yeats’s record of four victories in Royal Ascot’s feature race.

Unlike Aidan O’Brien’s great, whose quartet came on consecutive Ladies’ Days (2006-2009), Stradivarius has to regain his crown, having surrendered it with a fourth to Subjectivist last June.

Frankie Dettori’s long-time ally didn’t get the breaks that afternoon, but the John and Thady Gosden-conditioned eight-year-old has done enough in the intervening 12 months to suggest the fire still burns.

Stradivarius gained a head margin over Spanish Mission for a third Group 2 Lonsdale Cup triumph at York in August before a cosy two-and-a-half-length call from Alerta Roja in the same-level Doncaster Cup – he was also landing the two-mile, two-furlong test for the third time – three weeks later.

The rain-softened playing surface was no help when the chestnut performed with podium finishes behind Trueshan – likely to be ruled out by quicker terrain today – in Longchamp’s Prix du Cadran and the Long Distance Cup at Ascot in October.

But Stradivarius was back to winning form in the Group 2 Yorkshire Cup on his comeback with a one-length beating of Thunderous, and everything is in place for a bold bid to write his name in the record books.

WANEES is going from strength to strength and makes appeal in a wide-open heat.

Charlie Hills’ son of Le Havre caught the eye of the stewards with a stacked-full-of-promise debut sixth at Newbury last August – and is now unbeaten in three racecourse visits since.

Sent to Ascot for a seven-furlong novice stakes at the start of September, Wanees took the anticipated step forward for a half-length victory, following up under a penalty at Salisbury 26 days later.

We didn’t see Wanees for the remainder of the campaign, but he picked up where he had left off when making his return to the fray – and his handicap debut – at Sandown Park in April.

Tackling one mile for the first time against nine rivals, Jim Crowley’s partner was apt to over-race during the early stages, but he still had enough in reserve to tackle City Runner inside the final furlong to score by half a length.

A 7lb rise in the handicap demands more, but the likely strong pace over the straight mile will help my choice to settle, and another personal best is on the cards.

The short list is a long one, with market leaders King Of Time, Whoputfiftyinyou holding leading claims, along with, at bigger prices, Atrium and Thesis.

2 REACH FOR THE MOON

CLAYMORE is put up as the value alternative to hot favourite Reach For The Moon.

There was so much to like the Jane Chapple-Hyam-saddled colt’s debut in a seven-furlong novice stakes at Newmarket last October, when Claymore made all the running for a four-length victory.

The trainer was keen to give the son of New Bay a chance in a Guineas trial, and he lost little in defeat with a second, beaten three and a half lengths, to Native Trail.

The winner captured the Irish 2,000 Guineas at the Curragh next time, while Claymore headed to Paris for the Poule d’Essai des Poulains at Longchamp.

A draw in stall 15 effectively did for the chances of Adam Kirby’s mount, who trailed in last, and he shouldn’t be written off.

The Queen’s Reach For The Moon has an obvious chance of a popular victory, with Cresta third best.

TACTICAL was a Royal Ascot winner in the Queen’s silks two years ago, and should again go well.

After capturing the Listed Windsor Castle Stakes at the meeting in 2020, the Andrew Balding trainee took the step up to Group 2 company to lift Newmarket’s July Stakes.

Three defeats in the top tier were followed by a curate’s egg of form – one win from six attempts – last season.

But, on the back of wind surgery, Tactical came home well to take fifth in a big-money handicap over six furlongs on Newmarket’s 2,000 Guineas undercard – and that will have set Ryan Moore’s partner up for today as he returns to seven furlongs.

Valfortino, Montassib, Inver Park and Al Rufaa are the most convincing candidates to fight it out for the minor medals.

Previous : Agony for woman forced to give birth to baby boy two days after being told he had died
Next : Young girl, 10, pounced on by wild animal before being dragged off and mauled to death – World News