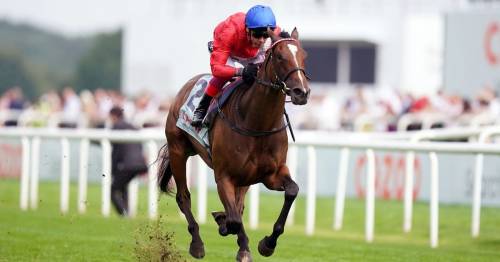 Prosperous Voyage looks primed for a big run in the Coronation Stakes (4.20pm) on day four of Royal Ascot.

The 1,000 Guineas second is fancied to overturn the form with Cachet at the top fixture.

My selection galloped home strongly to get within a neck of the front runner – a step up on her previous efforts.

But she can prove that run, at odds of 33-1, no fluke in front of the crowds at the Berkshire track.

Earlier on the card, top sprinting honours can go to Perfect Power in the Commonwealth Cup (3.05).

Richard Fahey, on the scoreboard with controversial scorer The Ridler on Thursday, trains this classy sort.

The drop in trip looks sure to help him as he lines up in this competitive heat.

Mawj got her career off to the perfect start at Newmarket last month, and is fancied to continue in similar vein.

Godolphin had three representatives in the fillies’ maiden that has produced 2019 Albany Stakes winner Daahyeh and this year’s 1,000 Guineas heroine Cachet in recent seasons – and Saeed bin Suroor’s daughter of Exceed And Excel was the least fancied at 12-1.

But Mawj belied her red-cap status, and in style, summoning a sharp burst of speed to lead at the furlong pole before powering four and three-quarter lengths clear by the time she reached the winning post.

Despite posting an impressive success, Ray Dawson’s mount still looked as that first experience would not be lost on her, and the step up to Group 3 level should hold no fears for the half-sister to Poule d’Essai des Poulains victor Modern Games.

Meditate is an obvious candidate on the strength of her wins at the Curragh and Naas, along with Cathy Come Home and Powerdress.

Perfect Power will be aided by the step back to sprint distances as he seeks the third Group 1 triumph of his career.

Unlucky in running when a close-up fifth in Glorious Goodwood’s Group 2 Richmond Stakes next time, Perfect Power then ended his campaign with two victories at the highest level.

My selection produced a storming late finish to beat Trident for Deauville’s Prix Morny in August before another Christophe Soumillon special in the Middle Park Stakes at Newmarket the following month.

Held up at the rear of the 10-runner field, Perfect Power still had more rivals in front than behind at the two-furlong pole but swept down the outside to beat Castle Star by half a length, with Go Bears Go in fourth and Twilight Jet in fifth.

This season, Perfect Power earned a crack at the 2,000 Guineas with a Greenham Stakes success at Newbury in April but failed to last home over a mile when seventh to Coroebus at Newmarket, so coming back in trip is the right move.

Tiber Flow and Ehraz, closely matched at Newbury last time, Go Bears Go and El Caballo can fight it out for places on the podium.

Moktasaab has plenty going for him as he bids to put owner Harry Redknapp in the Royal Ascot winner’s circle.

With a record of one victory from eight attempts for Owen Burrows, the gelded son of Lope De Vega joined William Knight – to carry Redknapp’s silks – after going under the hammer for 110,000 guineas at the Tattersalls Horses In Training Sale last October.

And Moktasaab has thrived for the change of scenery, wasting no time in getting off the mark for his new connections with a one-and-a-half-length score on Newbury’s Greenham Stakes undercard in April.

Callum Shepherd’s mount followed up after a 7lb rise at Goodwood a fortnight later, but didn’t handle Epsom on Oaks day, finishing sixth of 14 behind Royal Champion.

It’s best to overlook that blip now Moktasaab is back on a more conventional course and, while he was beaten on his only previous attempt at a mile and a half, there are winning half-siblings on his page to suggest the distance will prove within range.

The short list is, predictably, a lengthy one, with Contact, Candleford, Brilliant Light and Ever Present at the top of it.

Prosperous Voyage is the value bet to exact revenge on rivals Inspiral and Cachet and gain a register a first success at the top level.

When Inspiral, who makes her belated return to the fray this afternoon, captured the Group 2 May Hill Stakes at Doncaster in September and Newmarket’s Group 1 Fillies’ Mile the following month, it was the daughter of Zoffany who took the silver medal back to Ralph Beckett’s Kimpton Down Stables.

And she once more occupied the second place on the podium in the 1,000 Guineas at Newmarket at the beginning of last month.

On that form, there should be little between the pair once again, and yet Prosperous Voyage, for whom a stiff mile on fast ground looks ideal, can be backed at twice her opponent’s odds.

Inspiral, the champion two-year-old filly, is destined to play a role if razor sharp after 252 days off the course, while Mangoustine, who defeated Cachet in the Poule d’Esssai des Pouliches at Longchamp two weeks after Newmarket, is also in the mix if able to cope with this afternoon’s quicker terrain.

Invigilate is capable of rewarding each-way support – at the very least.

A full-sister to Expert Eye, who lifted the Jersey Stakes for Sir Michael Stoute and the late Prince Khalid Abdullah’s Juddmonte operation at Royal Ascot four years ago, Invigilate got off the mark at the third attempt when following defeats at Newmarket (fifth) and Chester (third) with a victory at Leicester in September.

Stoute re-introduced the bay in a fillies’ handicap over Nottingham’s extended mile at the start of last month, and Invigilate marked her comeback with a one-length second to Washraa.

The bare result doesn’t tell the whole story, however, as my selection deserves extra credit for finishing strongly from the back in a race where the principals held handy positions.

The British Horseracing Authority assessor has left Invigilate on a rating of 82 – Washraa reopposes on 3lb worse terms – and, with further improvement to come on the fifth outing of her life, Jimmy Quinn’s partner can go well at decent odds.

Heredia is unbeaten and enters calculations in a wide-open contest, as do Zanbaq, Lullaby and the Queen’s Discretion.

Ottoman Fleet is expected to thrive for the opportunity to tackle a mile and a half for the first time as he steps up to Group 2 level.

It’s fair to infer there was a bump in the road during the Godolphin runner’s early days in training – the 425,000-guinea yearling didn’t make the track until the April of his three-year-old career and, when he did, he did so as a gelding.

But there was enough promise in his Newbury debut – the son of Sea The Stars went under by a neck to fellow Charlie Appleby trainee Natural World – to suggest Ottoman Fleet could progress into a smart colt.

His success, by half a length from Zain Sarinda, in the 10-furlong Listed Fairway Stakes at Newmarket four weeks later represented a step forward – and there is more to come.

Favourite Changingoftheguard finished fifth in the Derby at Epsom 13 days ago – Grand Alliance came home in 11th – and is feared most, ahead of Lysander.

Korker gets the vote in a real headscratcher to close proceedings.

A three-time winner as a two-year-old, including a fast-ground nursery over five furlongs at Haydock Park last September, Karl Burke’s son of Dandy Man ran as if needing his return to the fray at Sandown Park in April.

But Korker was back in business at York’s Dante fixture last month, bursting through from the rear under Clifford Lee to beat Maybe Even Never by two and a quarter lengths.

Under the circumstances, a 9lb rise in the weights to a new British Horseracing Authority figure of 104 was to be expected, and another good account is on the cards here.

Dangers lurk at every turn, with Ladies Church, Loves Me Likearock and, at bigger odds, Fearless Angel just three names worth throwing into the melting pot.

Previous : Thousands of women with breast cancer could benefit from new NHS-approved pill
Next : Long Covid risk is lower from Omicron compared to Delta, research suggests