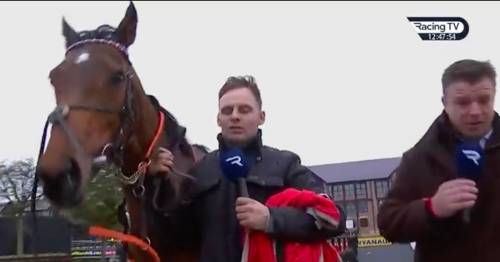 Trainer Ronan McNally cast doubt on the "massive gamble" after an easy win for his horse All Class at Punchestown.

The mare was backed into 13-8 favourite from 4-1, ahead of her 23 length victory in the William Hill Ireland Pick Your Places Handicap Chase.

On her second start for her stable, the six-year-old eased home underDonagh Meyler to get off the mark over fences.

Fans had their say on the 'extraordinary' race, which saw the winner keep tabs on front runner Capture The Drama, racing well clear of the pack.

The other horses were nearly a full fence behind the leader at the fifth last fence, where All Class closed.

The favourite took the lead comfortably ahead of the final two fences and crossed the line a long way clear.

Asked about the support in the market for the horse, McNally told Racing TV: "I don't know if it was a massive gamble or not there. We had a few quid on but it was nothing substantial.

"I think the bookies run for cover with any of my horses these days, so I wouldn't read too much into gambles with my horses."

The trainer added: "Chasing was a bit of an unknown. In her beginners' chases there she was putting holes in fences and landing on top of them and on her handicap debut over fences she fell, so it was just about getting round today.

"I think it was a bit of a fortunate race today. It's hard to read into what we actually achieved. I just hope that the handicapper doesn't go crazy, because all we have beat is a 13-year-old that probably went a wee bit quick today."

All Class previously rewarded huge market support in a Flat handicap at Navan in March, when trained by David Dunne.

After Tuesday's race, the stewards held an inquiry.

All riders with the exception of those riding the first two horses, along with Shane Fenelon and Harry Swan, who came off their mounts at the first fence, were interviewed.

IHRB communications director Niall Cronin said: "The riders felt that the early fallers contributed to them getting so strung out early on and that they went very quick for the type of race it was. The stewards noted their explanations."

All Class holds an entry in a handicap hurdle at Carlisle on Sunday and another at Ayr on Monday.