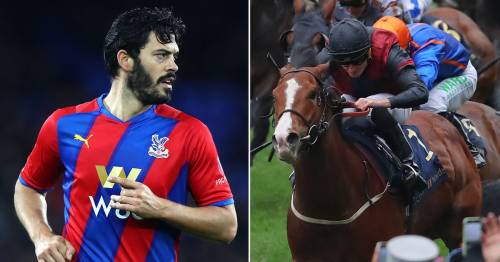 Ryan Moore was the toast of punters and Crystal Palace star James Tomkins after he landed a rare Royal Ascot double.

The jockey weaved his way through a huge field to win the Wokingham Stakes on Rohaan. Sent off at 18-1 after running below-par this season, David Evans' sprinter bounced back to form to scoop the £94,500 first prize.

Rohaan was the first horse since Selhurstpark Flyer (1997/8) to win back-to-back renewals. In the saddle the outsider had a sportsman in fine form, who went on to lift the top jockey trophy at the meeting for the ninth time.

Tomkins, who has celebrated major wins with Rohaan before, owns the four-year-old in partnership with Chris Kiely, the son of Palace goalkeeping coach Dean.

Rohaan (red and black colours, two from the nearside rail) powers to the front in the 2022 Wokingham Stakes
(

Kiely revealed it had been a tough road back to the big time for Evans' stable star, whose career winnings add up to £278,878.

“On a March Saturday morning, a load of us were going out to Dubai and Dave (Evans) said Rohaan was bleeding everywhere after falling on the gallops and that we should think about retiring him," he said.

“Dave the magician got him right and kept him ready. He said two weeks ago that Rohaan is absolutely flying. I don't know how he has got him back. I thought we may have been too hard on him.

“I've had two kids and got married, but this is the best moment of my life. I can't believe what has happened and I am so emotional. Dave has somehow got him back to the Wokingham and he has won on the bridle.”

Rohaan conceded weight all round and Moore, doubling up after setting the fractions on Broome (6-1) in the Hardwicke Stakes, timed his run to perfection.

Racing on the stands side, he powered his way between Jumby and Popmaster to win the competitive handicap with something to spare.

Moore said: “I didn't have to do a lot. Rohaan obviously really enjoys coming to Ascot. Dave has done a magnificent job with this horse. The horse has tested him over the last couple of months and he has got him going sweetly again now.

It was the rider's seventh triumph of the week – and he also landed Thursday's feature Gold Cup on the favourite Kyprios.

Saturday's meeting, run in the coldest temperature over the five days as rain swept in during the finale, had the biggest attendance of 69,297.

Previous : Naval Crown wins £1m Platinum Jubilee Stakes at Royal Ascot in thrilling finish
Next : All your questions about £400 energy discount – when it arrives and who loses out