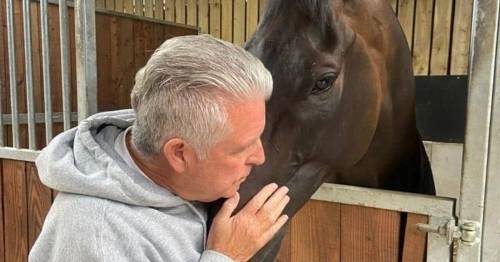 Owner “distraught” at being ordered to change “inappropriate” name of racehorse

An owner is "distraught" at being ordered to change his horse's name dubbed "inappropriate" by racing chiefs.

Nick Rhodes called his two-year-old colt Buggerlugs, in memory of his late father Les. Rhodes senior, who took his son to his first race meeting at York at the age of ten, used the word in an affectionate manner during his childhood.

The 'informal, old-fashioned' term is 'for referring or speaking to someone in a slightly insulting but friendly way' according to the Cambridge Dictionary. However just a day before the juvenile's debut at Beverley on Tuesday, Rhodes was told he would have to think of new name for Buggerlugs.

Bosses at the British Horseracing Authority felt that most people would be unfamiliar with it and notice the unpleasant swear word. Rhodes, a retired chairman of national mortgage brokers the New Homes Group, has named all his runners after his home county, including five-time winner Eeh Bah Gum.

He said: "We are distraught by being told to change the name of the horse. My late father used to call me 'little Buggerlugs' as a child. I had a call yesterday to say they were not happy with the name and if we didn't come up with an alternative quickly they would have to pull the horse from the race.

Rhodes with another of the horses from his stable

"I think it's disrespectful to the people of Yorkshire, our culture and dialect."

Rhodes, who bought his first horse Yorkshire Pudding eight years ago, shares his ownership journey on Facebook. His horses have their own pages, run by his wife Lena and they had ordered some 'Buggerlugs' sweatshirts for his followers.

The son of Shalaa, who joins Eeh Bah Gum and Flippin' Eck on the team, was named officially last summer with Weatherbys.

The horse makes its debut at Beverley Racecourse (pictured)
(

A spokesperson for the British Horseracing Authority said: “On further consideration, the name was viewed as inappropriate.”

Rhodes, who decided on the alternative Sling Yer Hook in response to the situation, has vowed to fight the decision.

"We want Buggerlugs' name reinstated," he added. "I think we have been badly treated. We have done a lot for racing over the years and lots of people enjoy following our horses. It has spoilt our first day at the races with him."

Fans of the sport took to social media to have their say on the matter, ahead of the horse's run in the Racing TV Novice Stakes (2.10). They said: "Absolutely ridiculous that anyone could find what is a jokey insult offensive.

"I call my husband buggerlugs all the time – the definition in the Urban Dictionary of an older, grumpy person suits him down to the ground!"

Another added: "My parents always called me buggerlugs and it's often what I'll call the horses or the cat. It's not a word that's used in a derogatory manner infact the total opposite."

Sling Yer Hook is 22-1 in the betting for the opening race of seven on the card at the East Yorkshire venue.

Previous : Tennis legend Chris Evert confirms chemotherapy update after ovarian cancer diagnosis
Next : Killer inmate who seduced prison boss before going on the run together may have shot her