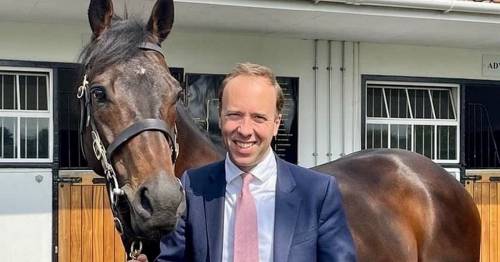 A caption on a social media picture of Matt Hancock and a horse caused quite a stir on social media.

The former health secretary posted three pictures of his visit to Newmarket stables during a constituency visit. At the West Suffolk location, the MP met stallions including Time Test, who has made an impressive start to his new career.

Hancock, who was also snapped by the photographer putting a hand out to a foal, heard about the training being offered to newcomers on the job. But it was the way the location of the visit appeared online that rather tickled Instagram and Twitter users.

With it tagged, his page read: "Matt Hancock … National Stud."

Dragons Den investor Deborah Meaden was among those to spot the gaffe. "Looks like someone's got a new job title," said Patrick Kidd on Twitter, a writer for The Times.

While the account for racing trainers Fergal O'Brien and Graeme McPherson joked: "Is he going straight in as a NH (National Hunt) sire?"

Hancock resigned from his job as health secretary in June last year after footage of him kissing his aide Gina Colangelo in his office during lockdown emerged. In recent weeks, he told Sky News' Beth Rigby Interviews programme that he chose to stand down from his role in the aftermath of the CCTV images going public.

Prime Minister Boris Johnson had previously suggested it was his call to remove Hancock from his Cabinet.

Just days before his trip to the National Stud, Hancock was photographed enjoying a ride on the dodgems with his children. The 43-year-old chuckled as he whizzed around on the ride at the Chester fun fair.

Then it was back to his normal duties, learning about how the Stud is tutoring people with no previous experience of working with horses. With a couple of pictures from the site, he posted: “Pleasure to visit @thenationalstud in Newmarket & meet their stallions including Time Test – and discuss their impressive Stud Employment programme.”

The Stud has been part of the British thoroughbred industry for more than 100 years. Acquired by The Jockey Club in 2008, it offers tours to the public and currently has six stallions on site.