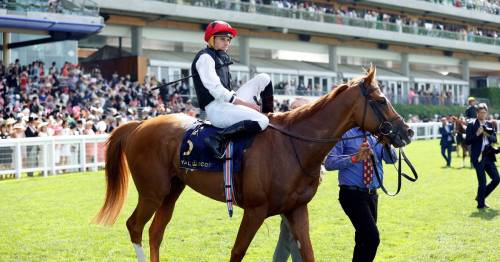 Kyprios has collected the marquee title of the week at the 2022 Royal Ascot Festival, after clinching the Gold Cup with Ryan Moore on board. Kyprios and Moore saw off the the legendary Stradivarius to secure the coveted title in the beaming Berkshire sunshine on day three of the famous flat race meeting.

Heading into the race Stradivarius was unsurprisingly the name on everybody's lips having already secured an impressive three Gold Cup titles. A fourth victory would have been historic, equalling the great Yeats' Ascot record. Despite a fairytale story being on the cards, Kyprios and Moore had other ideas.

Throughout the race Dettori's runner paced alongside the eventual winner, with both patiently weighing up their options ahead of the final dash for home.

In a tight bunch, Moore and Kyprios were the pairing that broke ahead, whilst Dettori and his three-time winner found themselves penned in the pack. After spending the majority of the race along the running rail, the Italian veteran was forced to push Stradivarius right across the field and down the outside, with the legendary duo forced to take the scenic route in order to make history.

The change in plan was not enough though, as favourite Kyprios had all too much for Mojo Star in second and Stradivarius in third, going on to secure his maiden Gold Cup victory. Whilst it may have been the horse's first victory, the win for jockey Moore was his third in the famous race.

Ryan Moore celebrates victory in the Gold Cup at Ascot
(

And, his 2022 win may well have been his toughest, after admitting it 'wasn't a nice ride'. Moore told ITV Racing: "It wasn't a nice race to ride. He stepped slow which is unusual for him. I didn't like the spot I was in, we were going slow. I knew Frankie would get an easy time in front, so I had to move him to the outside and he doesn't really like doing it.

"But, I had to get going and he has got there and Mojo Star has come to us and this fella just kicked in then, and he was comfortable at the line. I don't think we saw the best of him and I am glad he has now come over here and won, there are plenty more big days with him. Talking abut the fierce challenge of Mojo Star and Stradivarius Moore added: "He [Kyprios]is brave. The race was a lot more complicated than it should have been, but I think he is much the best.