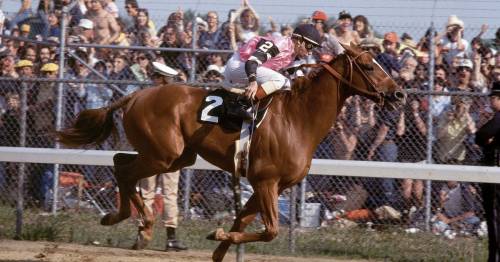 Kentucky Derby 2022: History of the ‘Run For The Roses’

Penny Chenery, whose great colt Secretariat won the Kentucky Derby in 1973, called it “a unique time of thrill and tension and worry”.

Steve Cauthen, on board Affirmed for the ‘Run for the Roses’ – the Kentucky Derby hero was first draped in a floral blanket in 1932 – described riding in the race in 1978 as “being on the centre stage of the universe”.

The Kentucky Derby may lack the longevity of its English cousin – it was first run in 1875, 95 years after Diomed’s success at Epsom – but its status among the most treasured prizes in global horseracing is unquestioned.

Originally staged over the Derby trip of a mile and a half under the twin spires at Churchill Downs in the Bluegrass State, the Kentucky Derby was shortened to its 10-furlong distance in 1896.

Its inaugural running went to Aristides and Oliver Lewis, an African-American jockey. Black riders were aboard 15 of the first 28 winners of the race.

The first leg of the US Triple Crown – the Preakness at Pimlico follows two weeks later, and the Belmont Stakes at Belmont Park a further three weeks on – the Kentucky Derby is the touchstone of the great American middle-distance thoroughbred.

Seabiscuit’s rival War Admiral won the 1937 Kentucky Derby en route to becoming the fourth – there are now 13 – horse to win the Triple Crown.

Citation (1948) was the first of the post-war greats, while Northern Dancer (1964) was arguably the most influential stallion – on both sides of the Atlantic – of the modern era.

Seattle Slew (1977) and Affirmed the following year captured the Triple Crown but US racing fans had to wait another 37 years before the Bob Baffert-saddled American Pharoah (2015) followed suit, with the same trainer’s Justify winning all three races in 2018.

On Saturday night the winning owner will receive a whopping £1.3million – and a place in horse racing history.