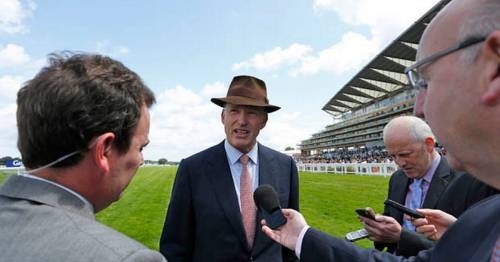 It was accepted at a British Horseracing Authority (BHA) hearing on Thursday that the cause was environmental contamination from the filly’s groom – then a user of the recreational drug – after a Listed race victory at Newbury last June.

Asked if he was concerned at the use of drugs within the racing community, Gosden, who was fined £500 by the BHA, said: “I think there's a problem in this country and many others and I think the use of recreational drugs is endemic.”

The five-time champion trainer went on: “Racing is a huge multi-billion-pound industry that is very well regulated and a big subscriber to the Treasury.

“The horseracing here is of the highest standard in the world and is something to be proud of, it's a good part of ‘UK plc’, and to that extent I don't understand why the BBC tend to want to be negative about it all the time, I'm afraid.”

Meanwhile, Gosden has revealed that Mishriff will miss the Breeders’ Cup at Del Mar next month – but will race on as a five-year-old in 2022.

Gosden, who trains Mishriff in partnership with his son Thady, described the self-styled ‘World Championships’ of horseracing – the Classic and Turf were possible targets – as a “maybe” for the son of Make Believe.

But Mishriff, third to Sealiway in the QIPCO Champion Stakes at Ascot last Saturday, will now go into winter quarters before being readied for a repeat triumph in the Saudi Cup at Riyadh in February.

Do you think the BBC's horse racing coverage has a negative bias? Let us know here

“He won’t go to America and we will prepare him for the Saudi Cup next year,” Gosden snr said yesterday. “All being well, he stays in training next year – that’s the bonus!

“Sending him to California, not getting back until the middle of November and then trying to turn around and go to the Saudi Cup in February was too cramped a schedule.”

Winner of the Prix du Jockey Club in July 2020, Mishriff signed off for last season at Ascot last October before returning to land big-money pots in the Saudi Cup, the Dubai Sheema Classic at Meydan in March and the Juddmonte International at York in August this year.

“He had that time off after Ascot last year, and he thrived on it, so I think we should do the same,” added Goshen.

“You have to be careful – unless you’re careful, you’re going 12 months round.”

Previous : UK Covid cases rise by 49,000 as England’s R-rate at its highest since July
Next : ‘Squid Game’ mania has shoppers snapping up Vans’ white slip-on shoes