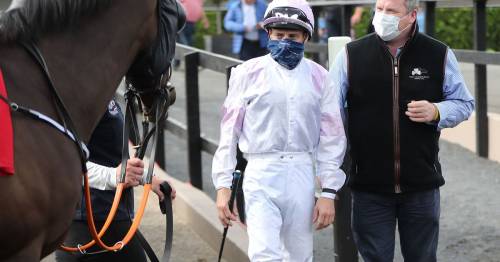 Gordon Elliott is aiming for Cheltenham after sending out his first winner since serving a six-month ban.

The trainer, who was suspended over a photo of him sitting on a dead horse, saddled Fancy Foundations to win at Sligo.

Sent off the evens favourite in the betting market for the 2m4½f chase, Denis O'Regan's mount stayed on strongly and crossed the line four lengths clear.

Elliott, out of luck with his first runner since March 8 on Tuesday’s Flat card at Punchestown, said he will aim Fancy Foundations at Cheltenham's first meeting of the season.

He has twice taken the trainers' title, for saddling the most winners, at The Festival in March – which is exactly six months away.

Elliott told the Racing Post : "We thought we came here today with a couple of good chances. It didn't happen for The Sliding Rock in the first but Fancy Foundations was good. He was a bit keen in a tactical race but Denis gave him a good ride and he jumped well.

"It's great for his owners Andrew and Gemma Brown, who are big supporters of the yard. I'm delighted to get my first winner back for them. We'll probably go to Cheltenham in October for a novice chase next. Andrew and Gemma are both from England so we'll look to go there for them to have a bit of fun."

Elliott received a 12-month ban, with half of it suspended, after an image of him sitting on top of the carcass of winning hurdler Morgan was circulated on social media.

Also ordered to pay costs of €15,000, the Irish Horseracing Regulatory Board stated his punishment reflected “the seriousness of the offence and the damage to the Irish racing industry.”

During Elliott's time away from the racecourse, Denise Foster took temporary control of his Cullentra House Stables in County Meath.

Elliott was expected to get back on the scoreboard in the first race on Wednesday's card, with the 8-13 favourite The Sliding Rock.

However she could finish no better than third in the Irish Stallion Farms EBF Mares Beginners Chase after making a jumping error.

Silver Star and Imperial Sachin’s were also out of luck later on the programme – and Fancy Foundations was his final runner of the day.

Among the stable's entries for the coming days is Cheltenham Festival winner Galvin.

Moved to trainer Ian Ferguson ahead of the big meeting in March, the seven-year-old is back with Elliott having stretched his winning sequence to five in the Sam Vestey National Hunt Challenge Cup Novices' Chase.

Joint second favourite for next April's Grand National at 25-1, Galvin could make his seasonal return in Sunday's Kerry Group Chase at Listowel.

Previous : Norm Macdonald Was the Real Thing
Next : ‘We are not criminals’: migrants protest in southern Mexico