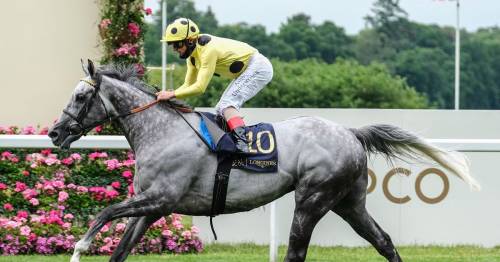 Tributes are being paid to Fujaira Prince after he sustained a fatal injury just days before a big race.

Trainer Roger Varian was putting the finishing touches to the grey stayer's preparation for British Champions Day on Saturday.

The prestigious Ascot fixture is the top class finale to the Flat season – and five-time winner Fujaira Prince was due to run in the Qipco British Champions Long Distance Cup.

However tragedy struck in his final piece of work, which left Varian's team at Carlburg Stables in Newmarket devastated.

"It is with great sadness that we have to announce the passing of stable favourite Fujaira Prince, who suffered a fatal injury on the gallops this morning," a post on his website read.

"Fujaira Prince was a lovely horse who has given us many special moments, the highlight of those being his success the Ebor in 2020.

"He will be much missed by the whole team here at Varian Stable, in particular by his groom Alan Rutter, his work rider Chiara Careddu, barn manager Dee Deacon, and of course by his owner Sheikh Mohammed Obaid Al Maktoum."

Fujaira Prince was around 10-1 in the betting for his intended weekend target, worth £283,550 to the winner.

Andrea Atzeni, his jockey for ten of his career starts, was delighted by the half-length victory.

Fujaira Prince made what was his final racecourse appearance in the same summer contest at York, when he crossed the line in 14th place.

It was the only time he had not finished in the top three, earning £303,265 overall.

Racing fans told of their sadness at the loss of the grey, who matched his looks with his ability on the track.

In June 2020, he raced clear of his Royal Ascot rivals for an eye-catching success.

Reacting to the news, one racing fan tweeted: "That is so incredibly sad, loved seeing him on the open weekend. Thoughts with everyone connected with him."

A third person added: "So sad to read that Fujaira Prince had a fatal injury this morning. I really took to him last year as he really reminded me of my favourite horse Defoe."

Defoe, another smart grey Flat racer for the same owner and trainer, died after picking up an injury in summer 2020.

Grosvenor Sport is offering new customers the chance to get £30 in FREE BETS when you bet £10 on horse racing.

Simply register, place you £10 bet on horse racing and you will receive £30 in free bets.