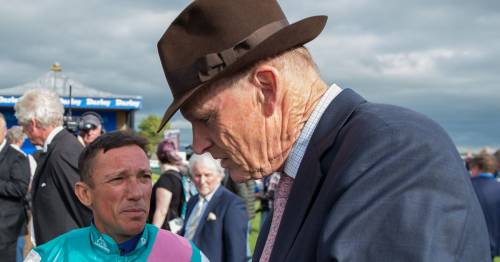 Frankie Dettori has been left in the dark after losing rides for his boss John Gosden.

The jockey has just one mount booked at Newmarket on Saturday, Ralph Beckett's Lezoo in the Listed Maureen Brittain Memorial Empress Fillies' Stakes. Gosden has three runners on the seven-race card, including Sunray Major in the feature Group 3 House of Cavani Criterion Stakes.

But Dettori will be on the sidelines as the trainer has given James Doyle the job of scooping the £45,368 first prize. Robert Havlin teams up with Stowell, a horse Dettori regularly rides and finished sixth on in the Copper Horse Stakes at Royal Ascot last week.

Dettori’s agent, Peter Burrell, said: "Frankie called the office this morning to find out what he may or may not be riding with a viewpoint to the weights. He has had no call in response and we have seen other jockeys are riding the horses. We have been told nothing else."

Gosden criticised his regular go-to jockey in the aftermath of his Gold Cup defeat on Stradivarius. For the second year running, Dettori met trouble in running on the stayer, in his pursuit of a fourth win.

Gosden shared his thoughts on the meeting's showpiece event after the jockey posted an impressive success on Coronation Stakes heroine Inspiral. He said: "He should have won. Our hero over-complicated it yesterday and I was clear in my definition of that."

Betfred is offering new customers £60 in BONUSES when you sign up and bet £10 on ANY race.

Gosden, who trains with his son Thady, said after reviewing what happened he was keen to "move on" to his next training task at Clarehaven Stables. As well as his placed effort on Stradivarius, Dettori finished runner-up on the yard's Reach For The Moon, the hot favourite for the Hampton Court Stakes owned by the Queen.

He was also second on the reigning monarch's Saga in the Britannia Stakes. Inspiral was Dettori's sole winner from 22 rides at Ascot – and he has not ridden on the racecourse since.

He treated fans to his trademark flying dismount and said: "She fell out of the stalls and I thought 'here we go again.' I just took a chance and got the splits but you need the horse to do that and she took off to the point where I was able to enjoy the last 50 yards. She's put some good fillies to bed in great style. Very exciting."

Betfair have started a book on who will be Gosden's next retained rider, with Hollie Doyle leading the way. At the weekend she became the first female jockey to take a Classic, teaming up with the trainer's filly Nashwa.