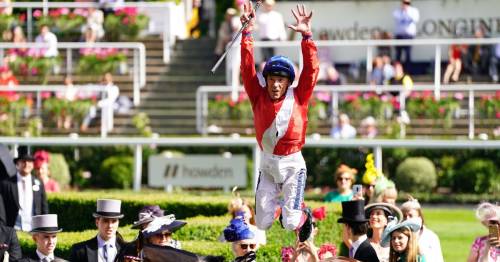 The sportsman went into day four without a single winner during the big week, after disappointing rides on fans favourite Stradivarius and the heavily backed Reach For The Moon on Thursday.

In typical Dettori fashion though, the Italian fought back day to get on the scoreboard atop the 15-8 favourite. It was a patient ride from the veteran jockey after a tricky start, as he kept Inspiral in the middle of the pack throughout the majority of the marquee race.

Approaching the final two furlong pole, the pair made their move through the tightly packed field and settled matters in a few strides, Dettori, given the biggest cheer of the week, was over the moon to break the deadlock at the huge fixture.

"She fell out of the stalls and I thought 'here we go again," he said. "I just took a chance and got the splits but you need the horse to do that and she took off to the point where I was able to enjoy the last 50 yards.

Dettori was no doubt under pressure to perform today after a below-par week, but the racing star revealed he remained confident heading into Friday's card.

He added: "I woke up this morning and took a bit of a while to warm up. Then I buried my head into today's races and I thought 'well I've still got a couple of chances and not all is lost yet. It is hard to do but you have to think out of the box, pull yourself together and and concentrate'."

The victory is also a landmark one for stalwart trainer John Gosden, as it was his 60th triumph at Royal Ascot.