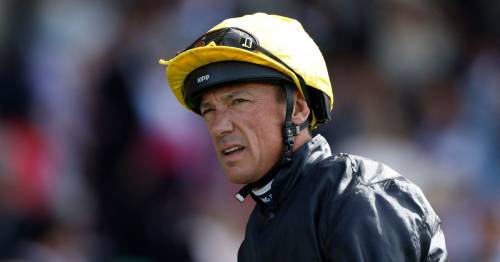 Star jockey Frankie Dettori has been defended by ITV presenter Rishi Persad after the Italian missed out on three race wins at Royal Ascot on Thursday.

Dettori and racer Reach For The Moon, owned by passionate racing fan the Queen, missed out on a win in the Hampton Court Stakes despite being the favourite. It completed a miserable afternoon for Dettori, who also suffered a defeat aboard Stradivarius, one of the most popular horses in training, in the Gold Cup.

Reach For The Moon was considered a potential Derby contender early in his career and was backed as a near-certainty at 2/5 against just five opponents. Dettori moved up to challenge leader Claymore at the top of the home straight and briefly drew level, but the run faded and jockey Adam Kirby led his horse to victory by nearly two lengths.

The agonising defeat concluded a three-race run that Dettori would like to forget, although he did little wrong on either horse and Saga was forced to fight through a competitive, large field only to narrowly fail to get up. However, he will undoubtedly like to get a shot aboard Stradivarius once more after the 51-year-old led the horse into traffic in similar circumstances to their fourth-place finish at last year’s Gold Cup.

Amid all the criticism aimed at Dettori, presenter Persad has defended the legendary jockey, whose career total of 76 Royal Ascot winners places him second only to Lester Piggott on the all-time list. There is a statue of the Italian near the entrance at Ascot to immortalise his performance in 1996 when he rode all seven winners on a single card.

“Obviously, the Gold Cup is the big race. Terrific performance from Kyprios but the big talking point was Frankie Dettori’s ride and the reaction of connections afterwards,” said Rishi Persad.

“Yes, I think Frankie if he could ride the race again would do things differently and it wasn’t his finest hour – and I think throughout yesterday, Frankie wasn't perhaps going to go home with a day that he will want to remember. He’ll want to forget it pretty quickly.

Do you think Frankie Dettori could have done more to lead Stradivarius to victory? Let us know in the comments section.


“But I thought some of the reaction to Frankie making perhaps not the best of things on Stradivarius… I thought it was a bit over the top. A little bit disrespectful to someone who has achieved what he has in the fame. Frankie Dettori is one of the all-time greats and the way he was treated in some quarters yesterday I thought was a little bit harsh considering all that he has achieved in the game.

“Everybody is entitled to an off day – Frankie Dettori has had more good days than most. Absolutely, he will want to have had another go at yesterday I’m sure, but let’s have a bit of perspective about what he has done.”

Coming around the final bend, Stradivarius – the winner of three Gold Cups – was less than a length behind on the inside of 13/8 favourite Kyprios, ridden by Ryan Moore. Kyprios quickened out of the turn, ensuring that Dettori would be forced to come around him in order to run down Ascot’s short home straight.

Dettori and Stradivarius were then forced to go around Mojo Star as well and while the horse made up some ground in the final furlong, the eight-year-old’s legs simply ran out of steam. Regardless, Kyprios undoubtedly deserves the acclaim after a tremendous trade and the horse could star over the next few seasons.