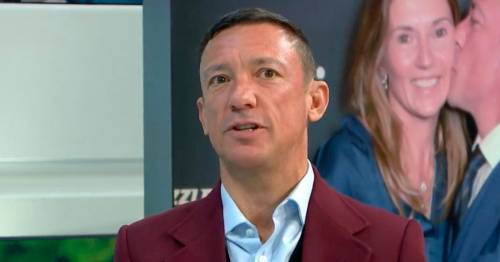 Frankie Dettori has looked back at the time he flew to England alone aged 14 to start his "new life."

The top jockey, one of the most recognisable faces of horse racing, was sent over from Italy by his father Gianfranco.

Italy’s champion jockey would be followed into the sport by his son, who could not speak English on his arrival.

With just £366 on him, young Dettori took his first job with Newmarket trainer Luca Cumani.

Nicknamed Frankie as his colleagues found Lanfranco too much to pronounce, his first meal over here was ravioli, which reminded him of home.

Recalling those days on Good Morning Britain with presenter Adil Ray, Dettori said he had to wear a tag around his neck on the plane over.

"The difficult thing was obviously I learned French at school not English, the weather, the culture and the food!" he said.

"So it took a lot to get used to it. And basically you have to grow up very quick."

Ray asked him if he encountered bullying in the early stages of his career and was treated as a "foreigner."

"But I'm not the only person in this country who was. I think people when they read the book they can relate to it because there's a lot of people from other countries come to this country to search for a new life and I was one of those – and it was difficult.

"Now I can say that England gave me so much."

Jockey Frankie Dettori pictured at Ascot on October 1, 2021, a meeting which celebrated 25 years since his 'Magnificent Seven''
(

Each morning, Dettori, who was on the show to coincide with the launch of his new book Leap of Faith and film, was up at 5am to start his job at the stables.

Aged 15, he celebrated his first win in a race and by 18 he was crowned champion apprentice.

In 1990, he was the first teenager since racing legend Lester Piggott to ride 100 winners in a single season.

Four years later he became champion jockey and cost the bookies in the region of £40 million by riding seven winners at Ascot.

He told Reid the unforgettable afternoon in 1996 is probably his greatest achievement.

"Up to this day (it was 25 years ago) I still have people coming to me saying 'thank you, you paid for my holiday' or my mortgage, or school fees and it's great, from all walks of life," he said.

"It's great that there's still a little bit of a dream that people gamble, sometimes lottery winners and even in racing."

But like any sportsperson, Dettori encountered low points, battling bulimia, depression and cocaine use.

In the year 2000, he miraculously survived a plane crash with fellow jockey Ray Cochrane. Tragically pilot Patrick Mackey was killed.

“When I did come round after the crash and I was on the plane, I didn’t know if I was in the other side, in another world or in heaven," Dettori previously told the Don’t Tell Me the Score podcast.

"My mate dragged me out the plane and the plane exploded."

Dettori recovered and reached the top his sport once again, winning his first Derby on Authorized in 2007.

But in the early 2010s he faced the darkest period of his life, which led to a six-month ban from competing.

His wife, Catherine, recalled: “We saw the darkness. Anxiety, depression and his weight was really bad. He would eat too much, then make himself sick. It was bulimia, a really frightening time.”

Dettori was forcing himself to throw up two to three times a day.

“It was self-harming. I went through it badly. You feel ashamed, scared, you have heart palpitations, anxiety," the 50-year-old said in his upcoming documentary (via The Sun) .

“My job was going t**s up, I was angry and frustrated, I fell into the trap of depression and took some cocaine.”

With support from Catherine, Dettori, reportedly worth around £14million, relaunched his career.

The 2015 Derby win on the John Gosden-trained Golden Horn was a key moment.

Last seen competing in Bahrain, Dettori plans to take several weeks off before returning to the racecourse to achieve even more.

He admits winning races is an "addiction" – and has no plans to call time on his career just yet.

"My biggest challenge will be when I stop," he added on GMB.

"How I'm going to feel. Because you've been in this adrenaline bubble for 35 years."

Previous : Wealthy Brit who stabbed wife to death at Costa del Sol home jailed for 20 years
Next : Shishkin ruled out of Tingle Creek but “nothing wrong” with star says Nicky Henderson