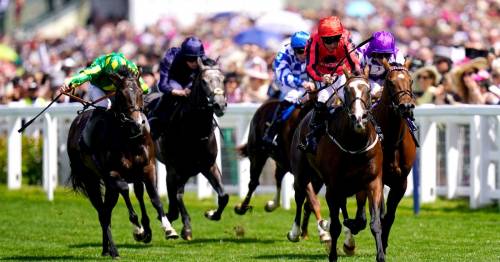 Racing experts hit out as shock winner The Ridler kept a race at Royal Ascot after cutting across his rivals.

Sky Sports Racing pundit Kevin Blake was among those to criticise the riding of the horse's jockey Paul Hanagan.

With his whip in his right hand, the sportsman appeared to let his mount drift across Crispy Cat (third) and Brave Nation (fourth) in the closing stages of the Norfolk Stakes.

The replay showed Hanagan, a senior member of the weighing room, start to straighten his mount as he came towards the favourite Walbank (second).

Dozens of people took to social media to voice their disapproval when the stewards failed to change the result.

In an enquiry, officials felt the interference had not improved the placing of The Ridler (50-1).

But Blake fumed on TV: "If that happened in Hong Kong or Australia you'd be dealing with bans in months not days. Because that sort of riding simply isn't considered acceptable. The reasons couldn't be more obvious.

"This is such a high risk, dangerous sport in normal circumstances. There were no catastrophic consequences here but the potential for it is there. You shouldn't be riding like that. That falls so far below the level of what a senior jockey like Paul Hanagan should be doing."

The pundit added: "He has just committed a professional foul and there are no consequences in terms of winning the race. Is that correct? Is that right?"

Hanagan was given a ten-day ban for careless riding. Crispy Cat's trainer Michael O'Callaghan said he felt his horse would have won but for the interference.

Shaun Parker, head of the BHA stewards, told ITV Racing: "In this case the way that The Ridler has finished, where the incident had occurred using the normal processes we follow we do not believe he had improved his placing as such."

Parker explained in their view it was not a case of "dangerous riding" – with the last offence of that type, when a horse lost the race, recorded in 2009.

"There are very specific requirements in terms of the guidance for dangerous riding. When we go through the processes we feel that was a considerable amount of interference in terms of the careless category which is how we have come to the 10-day suspension."

But trainer John Berry was among those in agreement with Blake.

"Amazing that stewards can have decided so quickly that that wasn’t dangerous riding. (It looked dangerous to me)." he tweeted.

"They must have made that decision already as they’ve said that the result stands. (Dangerous riding brings disqualification). This isn’t taking stewarding seriously."

Previous : Queen’s big hope Reach For The Moon loses at Royal Ascot on luckless day for Dettori
Next : Car ‘loses control’ and ploughs into house as crash leaves two in hospital