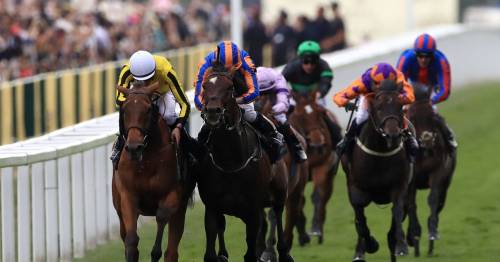 Ascot on Thursday: Tips and runners for every race on Ladies Day featuring the Gold Cup

Betfred's 13-8 favourite, trained by Aidan O'Brien, has matured into a classy performer this season with wins at Navan and Leopardstown.

On both occasions he has won going away, giving his supporters optimism for the 2m 4f Ascot trip, which Stradavarius thrives on.

Frankie Dettori's mount has ruled on three occasions in the feature race of the week, but was only fourth when he aimed to add to his haul 12 months ago.

Conditions are to his liking for one final bid, while Trueshan, who holds him on last year's form, would prefer the sun to make way for some rain.

Dettori, who takes the ride on the Queen's Reach For The Moon in the Hampton Court Stakes (5.35), will be hoping his luck will change at one of his best tracks.

On Wednesday, Lord North was left in the stalls when his blindfold became stuck – and the pair lost all chance of winning the £600,000 first prize in the Prince Of Wales's Stakes.

TIP: WALBANK had too many gears for his York rivals and is an exciting prospect for David Loughnane's stable. The Kodiac colt is fancied to take the next step up from the filly Pillow Talk, whose trainer Karl Burke is assembling a good team of juveniles this season.

TIP: FLYING DOLPHIN is an each-way hope in an open renewal. He represents shrewd connections and trialled the headgear he wears in his maiden win. On debut he finished close to Boundless Ocean, who subsequently placed at Listed level and that reads well in the context of this race.

TIP: MAGICAL LAGOON is the type to go forward this year and she took a step in the right direction at Navan on seasonal debut. That looks a solid piece of form and the extra yardage should be appreciated by this daughter of Galileo.

TIP: Aidan O'Brien knows exactly what it takes to find an ideal Gold Cup hope and that fills KYPRIOS' backers with confidence. His pedigree indicates the lengthy trip will be right up his street and he has scored with plenty to spare this term at 1m 6f. Burning Victory, well clear with smart stayer Buzz in the 2021 Cesarewitch, is one to note for each-way backers.

TIP: KOY KOY took the eye when second at Chester and has the scope to progress from a mark of 93.

6 Reach For The Moon

TIP: This revolves around the Queen's original Derby hope REACH FOR THE MOON, who should strip fitter for his reappearance behind My Prospero, who lost out by just a neck at the top level earlier in the week.

TIP: The way MONTASSIB picked up to take on and go past leader Marshal Dan from a rear position at Goodwood was striking and 10lb extra may not be enough to stop him winning here. Mums Tipple, who put in a better performance than his finishing position indicated at this track last time and Fools Rush In, with top claimer Harry Davies in the saddle, are two outsiders for the each-way shortlist.