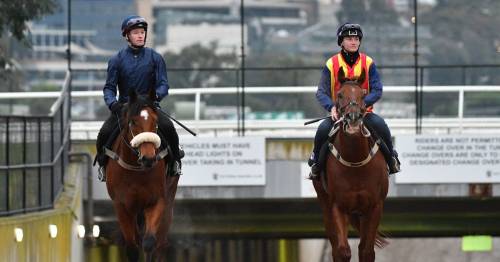 Australia hold the key to the Platinum Jubilee Stakes, with Home Affairs out to give Chris Waller a memorable double.

The trainer sent out Nature Strip to win the King's Stand Stakes earlier in the week and now it is the turn of his speedy stablemate.

Home Affairs defeated the Royal Ascot hero at Flemington in his homeland in February, winning at the highest level in October 2021. third that day was Artorius, another Australian hope from the stable of Anthony and Sam Freedman.

A strong finisher, the Berkshire track is expected to play to his strengths, along with the predicted fast pace. Waller has called Home Affairs a "very gifted horse" as he bids to become the first runner from his country since Black Caviar in 2012 to take Saturday's big sprint.

Fourth in the 1,000 Guineas when bumped late on. Should like the drop back in trip, still has plenty to give and market vibes are positive.

Three out of three at a lower level, the last twice with Frankie Dettori in the saddle. Is a work in progress and connections reach for the cheekpieces for his toughest test yet. The Juddmonte colours were carried to victory by Expert Eye in 2018, already tested at this level. However the potential is there for John Gosden's charge, who has learned plenty in his runs so far and he could be a big player if he puts it all together.

The best of these on official ratings (120, 2lb ahead of the 118-rated Creative Force) and had more speed than Nature Strip when there was little between them earlier in the year. The stiffer nature of Ascot poses a question mark and he's drawn near Campanelle, a rival also keen to go forward.

Finished first in his group in the 2021 Stewards' Cup, drifting left and not helping his cause. Since progressed further in big handicaps, finishing second in the Ayr Gold Cup when no match for the stands side winner. Was going easily with two furlongs to go and likely to get a good tow into this if he can tuck in behind from stall 26. Derby-winning jockey Richard Kingscote knows him well and the absence should not be a problem, as his form confirms.

A solid performer over track and trip, just losing out to Rohaan in this event 12 months ago. Has to prove that he's quite as good on faster ground however and is little value with so many runners lining up.

This course and distance handicap scorer (2018) is partnered by Hollie Doyle, who celebrated a memorable success earlier in the week. That came aboard Bradsell, who hails from the same Archie Watson team as the selection. Tabdeed has not won since taking a Group 3 in 2020 and has generally run at a higher level than this. After a few placed efforts, the handicapper has dropped him to a mark of 102. Smaller fields have not helped this keen racer on his last few starts and he's most interesting for his talented trainer and jockey combination.