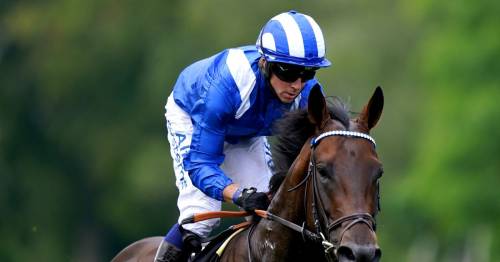 William Haggas is confident fans will see the best of Baaeed on Qipco British Champions Day at Ascot.

Unbeaten in five starts, the Sea The Stars colt has made a rapid ascent to the summit of British racing in no time at all.

A maiden winner in June, he raced to the top in the Group 1 Prix du Moulin at Longchamp last month.

Champion miler Palace Pier is on the Haggas colt's radar at the weekend in the Queen Elizabeth II Stakes.

Keen to stress it is not a two-horse race, the trainer expects Baaeed to be at his peak over the royal mile, as the preparation for his French trip was a little rushed.

"If we go from today all in one piece and we get there in the paddock as he is now, you'll see the best of him on Saturday," Haggas said.

Baaeed is 7-4 with Paddy Power for the Queen Elizabeth II Stakes, behind 13-8 favourite Palace Pier
(

A six-and-a-half length scorer in Group 3 company prior to his exploits on the continent, those closest to him are keen to see if he has the gears to retain his perfect record.

"The bit that none of us know and that includes me, is what he's got left," Haggas added.

"He moved beautifully this morning in his blowout, he's as fit as we want him and he's ready to go."

Last year's winner Addeybb will be joined by two stablemates in the richest race run in Britain this year, the Qipco Champion Stakes.

Improver Dubai Honour, supplemented into the race for £75,000 and Al Aasy form the triple assault on the £1.2million pot.

Addeybb is third favourite with most bookmakers to go back-to-back and despite strength in numbers, Haggas fears Derby winner Adayar.

"I'd be really frightened of him even at a mile and a quarter," he said.

Hamish is also among the yard's nine runners on the card in the Qipco British Champions Long Distance Cup.

He has another crack at the Alan King-trained favourite Trueshan,

“That day we lost to Trueshan (October 2019), who has come a long way since then, we were gutted," Haggas added.

"There were only four runners and we were 4-7 favourite and I was mortified!

"Subsequent events – while Hamish recovered from his tendon injury – have been very heartening for us."

Grosvenor Sport is offering new customers the chance to get £30 in FREE BETS when you bet £10 on horse racing.

Simply register, place you £10 bet on horse racing and you will receive £30 in free bets.

Previous : Penn State’s James Franklin says faked injuries have ‘not shown up’ on teams he has coached
Next : Lewis Hamilton may face another grid penalty amid Mercedes engine concerns in title race