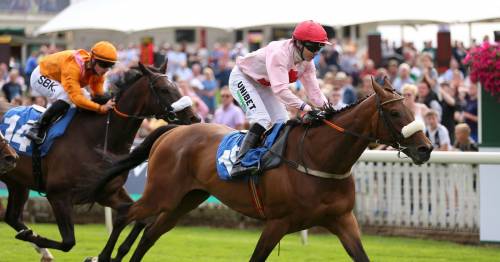 The owners of veteran Arcadian Sunrise were tragically forced to put the horse down just two days after he placed third at Royal Ascot.

The eight-year-old took more than £12,000 in prize money for his efforts in the Ascot Stakes on the opening day of this year's festival. However, it was confirmed on Thursday that the gelding died on Thursday following a short illness.

"It's terrible," said Sean Queally, son of trainer and owner duo John and Miriam. "We didn't get to see how good he was and he was only starting to get going. He ran some race at Ascot and could have even been closer.

"He barely ever finished out of the frame – he was always in the prize-money. That day at York [when he won the 2021 Sky Bet Handicap], he was so impressive. He was all guns blazing for the Galway Hurdle."

Based out of Dungarvan in Waterford, the Irish-bred contender clinched his first win at Carlisle in November 2019. He went on to win seven times from 20 career outings and was a consistent podium challenger, finishing outside the top four on only five occasions.

Arcadian Sunrise also proved himself to be a versatile performer as the crown jewel on the Queallys' books. As well as competing well over the flat, he enjoyed some jump success and won the Guinness Handicap Hurdle at last year's Galway Festival when he beat Bua Boy by half a length.

The Queally family grew concerned after the horse "just wasn't himself" when they arrived back in Ireland. Sean said they suspected colic when their star started "rolling and sweating," but the problem proved more sinister.

"The vet didn't know himself, he thought it might have been travel sickness, but there was a problem with his bladder as he couldn't urinate, and we had to take him to Fethard that evening," he added. "He started lying down and we couldn't get him up so we had to put him in the box. They did a few tests on his heart and said he should be okay in the morning."

The team didn't receive the update they wanted as Arcadian Sunrise "deteriorated overnight," and it wasn't long after that the doctor called for permission to put him down.