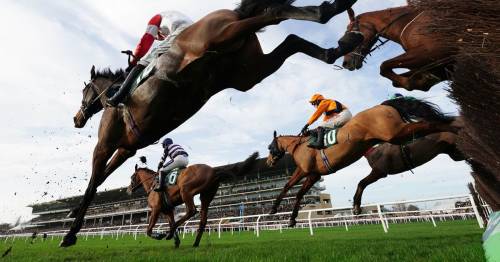 Into the new year and the big spring festivals are not too far away now.

Racing fans will soon be making their choices for the cards at Cheltenham and Aintree, once the trials are done and dusted.

But before then there is the chance to pick out some decent prices from the ante-post markets.

Mirror Racing has found a selection of value bets at odds of up to 33-1.

Novices aged five or six do well in it and Philip Hobbs' charge has some useful form to his name.

Fourth in a decent bumper behind Knappers Hill, Peking Rose and Stage Star at Aintree, he justified short odds on hurdling debut.

Runner-up in the Persian War, Up For Parol was 13 lengths behind and he is now off the 133 perch after a recent win.

Soaring Glory won the Betfair off that mark last season and Luttrell Lad has scope from 135.

He split useful pair Jpr One and I Am Maximus at Exeter, when he hit the front earlier than ideal.

A decent pace should see the selection in a better light too, as he is a keen racer.

Jonbon and Constitution Hill set the hurdling standard in what looks an excellent renewal of the Festival opener.

Nicky Henderson could be tempted to split the pair, with the latter the more obvious candidate to get further at this stage.

But with all the talk about the British hopes, Sir Gerhard is still available at 5-1.

Yet to match the front two over obstacles, his price will contract significantly if stepping up to the mark.

Crucially he jumped quickly on hurdling debut and when he got in tight he worked it out.

By Jeremy, there is pace in his breeding and Willie Mullins has won five out of the last nine runnings.

Sir Gerhard also has that all-important Festival win to his name already.

The strong stayer was favourite to win the National Hunt Chase and finished third.

Adrian Heskin sent him to the front in the straight and he lost little in defeat against Galvin, now a key Gold Cup candidate.

Less experienced than his stablemate over fences, he ran below par in the Irish Grand National on his final start.

That could have come too soon for the quality chaser, who has the rating to earn an Aintree spot.

Connections appear keen to have a runner in the race and he has plenty of potential going forward.

Owners Simon Munir and Isaac Souede were unlucky not to win this race in 2018 with L'Ami Serge.

In Janika they have a contender who is well-treated, with a hint of what might be to come.

Lightly campaigned in recent seasons, he was fifth in the Coral Cup off 145.

His best form is over fences however and down to 148 he has each-way appeal.

Seventh at Cheltenham most recently, he ran as though he was short of match practice on the back of wind surgery.

This is a horse who only a few seasons ago finished second in a big Festival handicap from 156.

Some better ground at Doncaster and a new trip of three miles could bring his spark right back.

Ferny Hollow is right at the top of the Festival bankers list and Blue Lord enhances Mullins' Arkle hand.

So Haute En Couleurs could be the one to take on Bob Olinger and co.

The ante-post favourite is very good but his jumping wasn't entirely convincing on debut and a question mark hangs over the form of Henry de Bromhead's stable.

Check out ante-post Cheltenham and Aintree odds with Grovesnor Sport

Haute En Couleurs has the same sire as the likes of Burrows Saint and Djakadam so is bred to stay well.

He began life for the stable in the Triumph, which shows he's highly thought of, while he got racing too far from home at Punchestown.

The French-bred gelding finished strongly to make a winning start over fences, in a quicker time than Envoi Allen on the card – and he rates an exciting prospect.