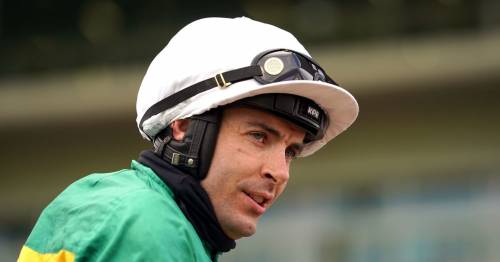 Aidan Coleman will team up with JP McManus' key runners Epatante and Jonbon.

Nicky Henderson's mare cruised to victory in the race 12 months ago but then suffered three successive defeats.

No match for Honeysuckle when defending her Champion Hurdle crown, Epatante underwent back surgery over the summer.

On Saturday, she is reunited with Aidan Coleman, who also gets the ride on Jonbon at Newbury tomorrow, after Nico de Boinville was injured in a schooling fall.

Coleman said: "Epatante has been a super mare – winning a Champion Hurdle – and she was very impressive in this race last year.

“I am just really excited to be getting back on her. Unfortunately, things did not go to plan after the Fighting Fifth and we are hoping that she can put up a similar performance to last year.

“All Grade 1 races are difficult to win and the Fighting Fifth is going to be no different – Sceau Royal was second last year and has started the season in great form while Silver Streak beat us in the Christmas Hurdle.

"They are proven Grade 1 horses and then you have Monmiral, who is something of an unknown quantity. It looks a high-quality race.”

His original rider De Boinville was hurt in a schooling fall and may have broken some ribs.

“Unfortunately, horses have falls when they are jumping fences," Henderson said.

“We have just had a message to say that Nico has been into the hospital, but he has now left that hospital. Nico has been in there since half past eight and still not been seen. He has given up waiting."

The trainer added: "“It is cruel before a weekend like this, which is pretty important."

Rain is expected at Newcastle, where Epatante tackles Monmiral, Sceau Royal, Silver Streak, Not So Sleepy and Voix du Reve.

Clerk of the course James Armstrong said: “Forecasts have been changing every day, but the latest forecast this morning is that we are due more rain tomorrow which is pretty heavy through to Friday night into Saturday morning.

"We are looking at upwards of ten millimetres of rain, and we could even get 20. It looks more like being wintry, slushy stuff with us but over the Pennines they are talking about more heavy snow."

“I am glad to hear the weather forecast as we were concerned about running him on faster ground," he said.

"If they get the forecast rain and it is good to soft or slower, that will be perfect.

“Monmiral was bought to be a staying chaser. He has a high level of form and this will tell us where we are. Last year he was quite lazy and, while he has sharpened up a lot at home, Saturday is a fact-finding mission."

Monmiral is 100-30 in the betting with the sponsors, behind 5-6 favourite Epatante.

Previous : Mom fatally shot at memorial for son killed days earlier in Chicago
Next : Pfizer made nearly £2bn in profit from cash-strapped NHS for its Covid vaccine