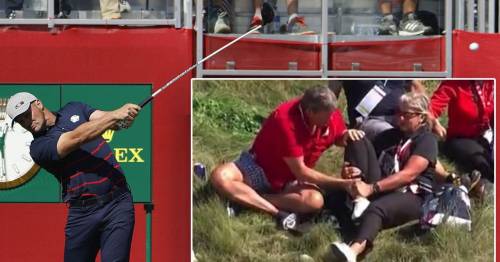 After dominating headlines ahead of the Ryder Cup due to his feud with Brooks Koepka, Bryson DeChambeau would have been hoping to get off to a strong start to quieten the talk around him, but that certainly wasn't the case.

With plenty of pressure on his shoulders, DeChambeau looked to bomb his opening tee drive in the fourballs action – having missed out on the foursomes earlier in the day – with the possibility of reaching the green in one.

However, the American pulled his effort left and inadvertently hit an onlooking spectator on the ankle while she was sitting on the grass at the side of the opening hole at Whistling Straits.

It is not yet known whether DeChambeau shouted fore, with the woman in question appearing surprised when she was struck.

The big-hitting American has been accused on numerous occasions in the past of not shouting fore following wayward shots, and golf fans immediately took to social media to criticise him after his latest poor tee shot.

"Do you think its time USPGA or the PGA start handing out sanctions to Bryson DeChambeau, if he does not shout 'FORE', before he injures someone seriously or even worse?" one Twitter user asked.

Another slammed: " @b_dechambeau how about yelling fore instead of letting you ball hit a fan. Didn't anyone teach you golf etiquette?!"

And a third social media user said: "Hey @b_dechambeau how about shouting fore on the first rather than trying to get the crowd going…..just took out one of your lady fans!!"

The severity of the injury sustained by the Ryder Cup spectator at Whistling Straits is not yet known.

Meanwhile, despite his wayward tee shot, DeChambeau somehow managed to make a remarkable birdie on the opening hole playing alongside Scottie Scheffler.

American have dominated the early proceedings at the Ryder Cup, coming out on top 3-1 over Europe in the opening foursomes action in Wisconsin.

After Jon Rahm and Sergio Garcia won the first point for Europe, the Americans quickly gained control – leaving Europe with it all to do.