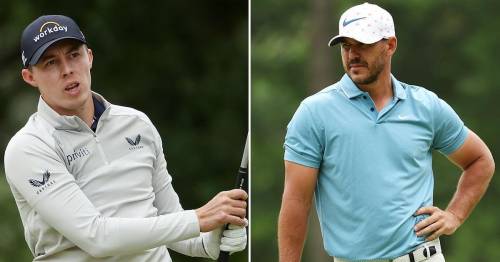 New US Open champion Matt Fitzpatrick insists he has no plans to defect to the Saudi-backed golf series despite Brooks Koepka going.

Four-time Major winner Koepka is set to become the latest star to join the lucrative LIV Golf Invitational Series. Koepka, 32, is expected to play in the second 54-hole 48-man tournament, which has a prize fund of £20million ,in Portland next week.

The former world number one, whose brother Chase played in the opening event at Centurion Club in England earlier this month, will be suspended by the PGA Tour as a result. But two-time Major winner Collin Morikawa yesterday denied rumours he was poised to follow suit after taking to Twitter to state: “I've said it since February that I'm here to stay on the PGA Tour and nothing has changed.”

English ace Fitzpatrick, fresh from his stunning triumph at The Country Club in Brookline, also backed up his commitment to the established US and European Tours. He is confident the PGA can remain the main attraction if they keep the likes of Tiger Woods, Rory McIlroy, Justin Thomas and Scottie Scheffler.

“That's where my focus is going to be and I just want to continue doing what I'm doing.

“The tour's not going anywhere, so they'll continue and as long as they've got Tiger Woods' support and Rory's, Justin Thomas’, there'll be no issues in my opinion.

“I saw Collin Morikawa's come out and made a statement, Scottie Scheffler, I feel like you've got some great players there.

“They're more than good enough to compete with any rival tour that might want to try and take hold of golf.

“I think the guys that we've got that are committed to the European Tour and the PGA Tour is just as impressive, if not more.”

Do you think Matt Fitzpatrick will win The Open next month? Let us know in the comments section.

The inaugural shotgun event in St Albans earlier this month saw winner Charl Schwartzel bank £3.3million. But after a thrilling shoot-out in the final pair at Brookline with Will Zalatoris, Fitzpatrick felt his US Open win vindicated the PGA’s format.

He added: “The traditional 72-hole stroke play in my opinion brings out the best player of each week.

“That's what you want to have particularly in the Majors.”