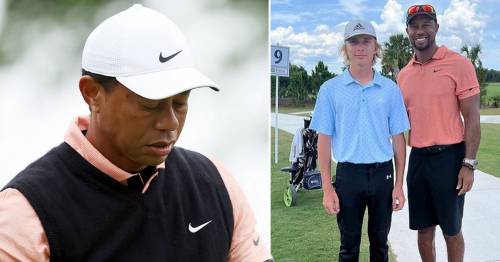 An image of Tiger Woods reveals the true extent of the damage imposed by the horrific leg injury he suffered in the car crash that threatened to end his career before his triumphant return.

Woods underwent extensive rehabilitation since suffering horrific leg injuries in the Los Angeles car crash, just two months on from undergoing further surgery on his back injury which has plagued the legend for years. He suffered comminuted open fractures to both the tibia and fibula in his right leg after losing control of his vehicle.

The 46-year-old spent three weeks receiving medical attention and even reportedly faced potential amputation – but he made a sensational return at The Masters, where he ended a 12-year drought by winning his 15th major at Augusta in 2019. Speaking after the incident for the first time, Woods told Golf Digest: “This has been an entirely different animal.

“I understand more of the rehab processes because of my past injuries, but this was more painful than anything I have ever experienced."

Woods’ celebrated and highly-anticipated return at the 2022 Masters was befitting of the iconic event, and the American even finished the first round in the top 10. He impressed enough to make the cut as he went on to finish a respectable 47th place. Having opted to wear trousers at the Masters and subsequent PGA Championship, a rare image of Woods wearing shorts went viral this week and brought in hundreds of positive comments from amazed fans.

The image highlights the challenge Woods was forced to overcome in order to return to high-level golf, with the scars from the damage clear on the 15-time major champions legs. South African professional Dylan Frittelli was impressed and commentated: “Now maybe people will give him the props he deserves for walking around Augusta and playing as well as he did this year!!!”

While he was in the middle of his battle to recover, Woods feared he would not be able to play professionally on the same schedule he had done prior to the accident. However, the fact he returned so soon – and impressed before the play took a toll on his body due to his rushed timetable – suggests he may have surpassed his own expectations.

“I’m not going to play a full schedule ever again,” Woods originally commented. “I’m going to have to pick and choose what events, and even then, my body might not cooperate with that.

“I don't know how many events I'm going to be playing in – and it's going to be up to training sessions, practice sessions, recovery tactics, all those different things to be able to do it.”

Woods finished with a six-over par final round of 78 to finish 13-over at the Masters, and he was forced to retire from the PGA Championship after making the cut due to health issues. It was the first time the legendary sportsperson withdrew from a major in his professional career.

Tiger Woods was forced to retire from the PGA Championship, marking the first time he has withdrawn from a major event
(

Do you think Tiger Woods will contend for the British Open title in July? Let us know in the comments section.


Woods was set to play in the US Open, but he withdrew from the third major of the year to focus on recovery from his crash. He still harbours hopes of playing in The Open Championship at St. Andrews this July.

After withdrawing from the US Open, Woods tweeted: “I previously informed the USGA that I will not be competing in the @usopengolf as my body needs more time to get stronger for major championship golf.

“I do hope and plan to be ready to play in Ireland at @JPProAm and at @TheOpen next month. I’m excited to get back out there soon!”

Woods is undoubtedly desperate to return to St Andrews as he has won the most prestigious title in golf on two occasions. His first win came in 2000 at the Fife course, and he returned to glory six years later to claim the second of three Claret Jugs the American has won.