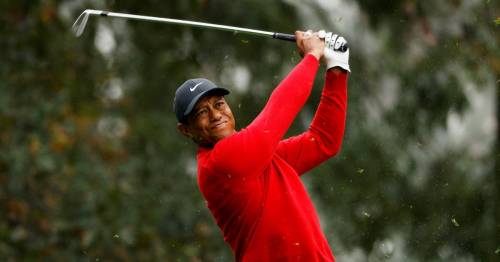 Tiger Woods is in line to pocket £5.8million from the PGA despite being ruled out of competition for the entire year.

The golf governing body introduced the Player Impact Programme (PIP), which rewards golfers based on their social media popularity and helping to bring more fans to the sport.

Despite not hitting a shot in 2021 due to the leg injuries he sustained from his horrific car crash in February in Los Angeles, Woods is eligible for the cash that will be handed out to the top 10 players on the programme.

And according to Si.com, Woods leads the way by a rather large margin ahead of Rory McIlroy in regards to popularity among google searches.

Tiger Woods is reportedly in line to pocket £5.8million from the PGA Tour
(

Woods has not featured in a professional event since the 2020 Masters just under a year ago, firstly due to injuries sustained playing, before his time away was stretched even longer after he was involved in a horror car crash.

The 15-time major champion suffered ‘open fractures affecting the upper and lower of the tibia and fibula bones’ from the crash meaning he has been unable to play golf since.

The Player Impact Programme was reportedly initially set up to stifle the threat of the proposed Premier Golf League, who looked to bring in some of the world’s best including Dustin Johnson and Brooks Koepka to compete in a new professional set-up.

However, the PGA Tour made their feelings clearly known when the idea began to gain momentum in May of this year.

It is of course no surprise to many that Woods is set to swoop the largest share of the programme’s reward, with the American no doubt regarded as the sports icon despite not being able to compete recently.

Woods recently sent his congratulations to Team USA after they wrote themselves into the history books with a record-breaking 19-9 win over Europe at Whistling Straits last month.

Whilst golfing icon Woods was not able to be there, the 82-time PGA Tour winner has still publicly congratulated his fellow countrymen for their remarkable achievement.

The 15-time major winner tweeted: “A dominant performance by @RyderCupUSA! I can’t wait to see and celebrate with all of you! Congrats to all the players, Vice Captains and of course Captain @stevestricker.”

There was some encouraging news for Woods fans however, as he was seen back on a golf course earlier this week for the first time.

He was seen on the golf course watching his son Charlie competing in a junior event.