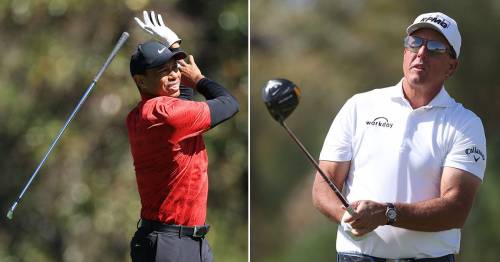 Tiger Woods and Phil Mickelson will lead a star-studded line-up for the US PGA Championship next week.

Woods, 46, made an astonishing return to major action at the Masters in Augusta last month, his first professional tournament since his high-speed car crash in February 2021. The incident left him with multiple breaks and fractures in both legs, and the iconic American had to learn to walk again before even taking to a course.

He defied the odds in Georgia with an opening round of 71, and despite struggling thereafter to eventually finish 14 over par, simply completing 72 holes was considered a remarkable feat. Immediately afterwards, he refused to commit to playing the PGA, instead targeting a place at The Open in St Andrews in July.

“That's something [St Andrews] that is near and dear to my heart and I’ve won two Opens there," he told Sky Sports. "It is the home of golf and my favourite golf course in the world so I will be there for that one.”

Mickelson meanwhile, has been absent in more acrimonious circumstances. The 51-year-old took an indefinite break from the sport following his divisive behaviour over the breakaway Saudi-backed tour.

The 51-year-old, who will be defending champion at Southern Hills after becoming the oldest major winner when he captured the tournament last year, originally accused the PGA Tour of 'obnoxious greed' for blocking players from signing up. However, he then somewhat contradicted himself by making derogatory comments about Saudi Arabia.

Tiger Woods and Phil Mickleson will play at the US PGA

During his period away from golf, the famous left-hander not only missed the Masters, but was excluded from the annual champions dinner at Augusta. He also lost multiple sponsors and saw his reputation tarnished.

However, last month he was named in the provisional field to defend the title he won at Kiawah Island. And now it has been confirmed by organisers that both he and Woods, with 21 major titles between them, will take to the first tee in Oklahoma next Thursday.

If nothing else, the presence of the two stars will undoubtedly raise publicity and media interest around the event. Indeed, it will represent the first time Mickelson has faced the media since his hiatus from the tour.

World No 1 Scottie Scheffler, who won the Masters last month, will start as one of the pre-tournament favourites. Former US PGA champions Rory McIlroy, Justin Thomas, Brooks Koepka and Collin Morikawa are also among those in the field.

World No 3 Jon Rahm, who played alongside Woods in one of his rounds at Augusta, has also been heavily backed. The Spaniard is seeking a second major having captured the US Open in 2021.

Previous : Killer inmate who seduced prison boss before going on the run together may have shot her
Next : When is Father’s Day 2022? UK and worldwide dates, and why we celebrate it