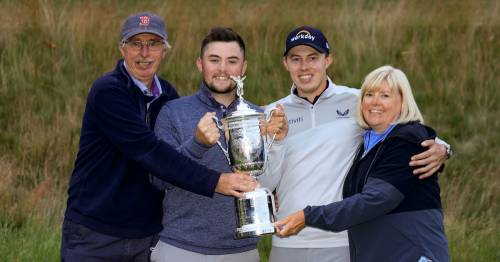 Believing British golfer Matt Fitzpatrick’s chance of winning the US Open had slipped away, his brother Alex left the course on Saturday and flew home.

But by the time the plane landed Matt was back in contention, so Alex returned to the airport at 5am the next day and hours later was at the 18th hole to see his brother become champion.

Sheffield lad Matt, 27, was given a bear hug by his sibling on the green after becoming only the third Englishman in modern times to win the major title.

Alex, 23, who lives in North Carolina, travelled over 600 miles on Sunday back to Massachusetts where the tournament was held.

After the rapid return to cheer on his brother, Alex said: “It’s been a hectic 24 hours but it was worth the 150 dollars coming back.”

The trip included a 90-minute drive from his home to the airport.

Alex has been praised for commiserating with the beaten golfers on the 18th green before celebrating with his brother.

After the nailbiting victory, Sheffield United fan Matt said of winning his first major title: “It’s what you grow up dreaming of.”

He said he was happy going into the tournament as an underdog, and his down-to-earth attitude is no surprise to those back home. The humble golfer visits young cancer patients at Sheffield Children’s Hospital where he is a patron and helps to raise funds.

Matt, from the Ranmoor area of the city, donated more than £75,000 to buy a scanner.

He did his A-levels at Tapton School in the suburb of Crosspool.

Also as a lad, he joined Hallamshire Golf Club in the city and played footie for Hallam Rangers.

At the weekend Matt was also cheered on at the course – the Country Club in Brookline, which is near Boston – by his parents Russell and Sue.

It is a lucky venue for Matt because it is where he also won the US Amateur title in 2013 when he was 18.

His little brother Alex was his caddie at the event nine years ago.

Alex is also a golfer and turned pro himself last month.