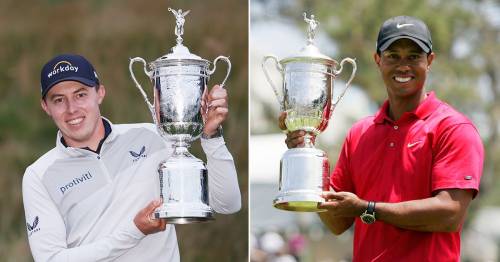 Matt Fitzpatrick has been predicted to win many more majors after picking up his first at the US Open on Sunday. The Sheffield star won the US Open in Brookline, Massachusetts, finishing six under par, one shot ahead of Will Zalatoris and Scottie Scheffler who tied for second.

The victory saw the 27-year-old become just the third Englishman in the last 90 years to win the title, after Tony Jacklin in 1970 and Justin Rose in 2013. And after witnessing Fitzpatrick’s success, former European Ryder Cup captain Paul McGinley has tipped the world number 10 to go onto create a major legacy, with his passion for the game mirroring that of icon Tiger Woods.

"There are very few players you see that have that obsession with the game to the extent that Tiger Woods had it and Faldo had it but I see it in this guy as well," the Irishman said, as quoted by the Daily Mail . "Everything about his life revolves around his dedication to the game. I know it’s easy to get giddy over players when they have just won a major but I don’t see Fitz settling for just one, as a lot of guys have done. He won’t rest on his laurels. He’ll be back at it in time for the Open at St Andrews next month.

"Now he has made the breakthrough in the majors at a good age, I see him going on to be one of those guys who wins four or five majors, or maybe even six.” Should Fitzpatrick achieve that number of major victories, he would equal Nick Faldo for the most wins at majors for a British golfer.

The 64-year-old bagged three titles at both The Masters and The Open respectively, and came agonisingly close to winning the US Open in 1988, but lost a playoff round to Curtis Strange. Fitzpatrick became just the second man, after Jack Nicklaus, to win both the US Amateur and US Open titles at the same venue when he clinched a remarkable victory at The Country Club.

He told Sky Sports : "Any record you share with Jack is incredible. To share that one in particular is incredibly special. He called me after the round and congratulated me. It's crazy to receive something like that from such a great golfing legend.

"[Winning the US Open] is incredibly surreal. I was doing media after the round and genuinely had to question whether it was a dream, whether I was going to wake up. I have never felt like that. People say that and I don't buy it, but it certainly felt that way [for me]."

Fitzpatrick's victory at Brookline was his first on the PGA Tour after seven previous titles on the DP World Tour, including the British Masters once and DP World Tour Championship twice. "I've never really said it but one thing I pride myself on is that if I get a chance I genuinely feel I will take it. If I get a chance to win, I'll go and win," Fitzpatrick added.

"If you actually look at my results, I don't necessarily put myself in position to win enough. I am not always in the last group. This year I have been three or four shots back going into the final round and then had a good round to finish in the top 10. The times I have given myself chances to win, I have won most of the time. I pride myself on being a gritty competitor, just wanting to win badly and doing the right things."