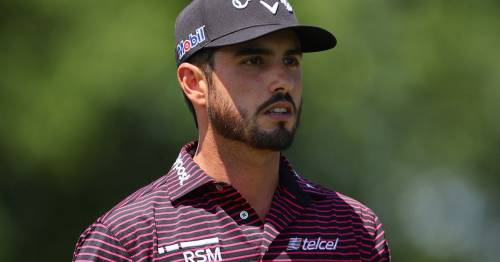 LIV Golf have confirmed yet another marquee signing to their ever-growing roster, after announcing Mexican star Abraham Ancer as their latest recruit. Ancer makes the controversial mega-money move on the back of an impressive tied-fifth finish at the US Open on Sunday.

The Mexican star has one PGA Tour victory to his name – coming at the WGC FedEx St Jude Invitational in 2021 – and is 20th in the world rankings. Ancer is the second LIV Golf name making headlines on Tuesday, after the Telegraph reported Brooks Koepka had also signed up.

Ancer's entry was officially confirmed by LIV bosses, and revealed he we make his debut on the breakaway circuit in Portland next week.

Announcing the Mexican's signing, a LIV Golf statement read: "LIV Golf today announced that world ranked No. 20 Abraham Ancer has officially signed and will compete in his first event at the LIV Golf Invitational Portland. The second event of the year begins June 30 at Pumpkin Ridge Golf Club in Oregon."

One man who will be more than happy to capture the 31-year-old is, LIV Golf CEO – and former world No. 1 – Greg Norman. As part of the statement, the Australian described Ancer as 'the perfect fit for LIV Golf'. He said: "Abraham Ancer has been a rising star who’s established himself as one of the world’s top golfers in a very short period of time.

"He is a consistent contender which continues to elevate our competition. Abraham’s global reach and star power in Mexico and Latin America makes him a great fit for LIV Golf, which is committed to growing the sport on a global scale, particularly in new and emerging markets.

Ancer will join the likes of Brooks Koepka, Bryson DeChambeau and Dustin Johnson.
(

"We are thrilled to have him on board and look forward to having him in the field in Portland and beyond.” Towards the end of the statement the Saudi-backed circuit added: "Additional player announcements and the full Portland field will be released in the coming days."

One of these additional players is expected to be Koepka, who like fellow stars Dustin Johnson, Phil Mickelson and Bryson DeChambeau, is expected to collect an eye-watering signing on fee. The eight-event series will return for its second tournament next week (June 30), when they head to the United States for the first time to compete in Portland.