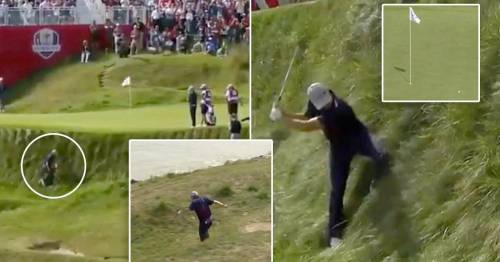 Jordan Spieth conjured two great escapes on the 17th when he hit a ridiculous flop shot from a cliff face – and then avoided falling into Lake Michigan.

His partner Justin Thomas' tee shot had hit a mound and ran off the sheer drop beside the green.

The three-time major champion flicked his blind shot out of the thick rough before losing his balance and running down the steep slope towards the water.

He stopped to turn and hear the huge applause from the crowd as his ball fell from the heavens to six feet from the flag.

TV microphones picked up the American saying: “Holy s***, is it short of the hole?

Even his opponent Jon Rahm offered a fist bump in celebration while Sergio Garcia joined the applause.

"I guess I almost ended up in the lake," said Spieth. "I don't think I exaggerated that fall, you know how steep that is.

"Once I started moving, I was like, I've got to keep moving until I find a flat spot.

"Yeah, it's kind of one of those shots that you practice as a kid for fun, and you don't ultimately want to have it.

"And the chances of it going there, you could roll a thousand balls off the green, and it's not going it stay where it was.

"I hit like a 52-degree because a 60 might have gone over the back of my head, and just tried to flick it right underneath and hit it as hard as I could, as high as I could.

"You know, it ended up right on a crown where it was a tough putt, and I think it's maybe a situation, first one in wins, and we just kind of got a really tough break there."

Thomas missed the six-foot par putt to see the Spaniards win three-up to claim Europe's first and only point of the morning foursomes.

Somehow, Spieth managed to hit the shot within feet of the hole, and avoided tumbling down the cliff into Lake Michigan
(

Grosvenor Sport is offering new customers £30 in FREE BETS when you bet just £10 on the Ryder Cup!

Simply register, place a £10 bet on the Ryder Cup and get you will be credited with £30 of free bets!

Asked about Spieth's shot, Garcia said: "You saw me. I was clapping. I was truly afraid for him to hurt himself because of those wood logs that are there, and it was very close to the wall.

"So I was hoping that he wouldn't hurt himself, but he hit an unbelievable shot. I didn't think there was a chance he could get it on the green."

Spieth's incredible effort proved to be in vain, though, as Rahm and Garcia won the match to secure Team Europe's first and only point in the morning foursomes at Whistling Straits.

Get all the latest live Ryder Cup odds at Grosvenor Sport as well as an odds boost on Europe to win day two!the

Previous : Spider expert explains what you should always do when you see daddy long legs
Next : USA’s Bryson DeChambeau slammed after hitting fan with opening tee shot at Ryder Cup